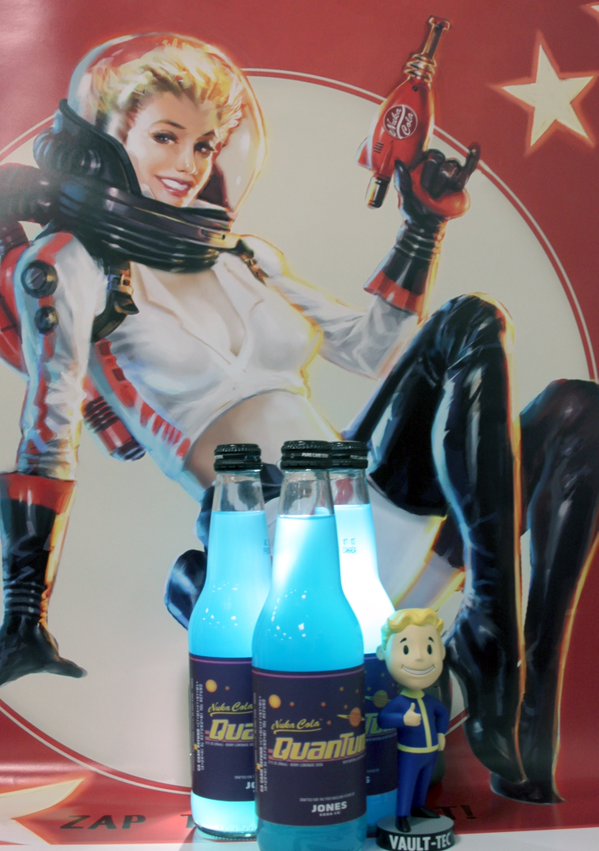 A new drink is set to arrive that will delight “Fallout” fans, and just in time, too.

As players are getting themselves ready for the arrival of the highly anticipated “Fallout 4,” a new bottled beverage inspired by the upcoming game is set to roll out in the U.S. as well. The Fallout 4 Nuka Cola Quantum, produced in collaboration with Jones Soda, will be available for purchase in the country starting Nov. 10, the same day the game will be released across platforms. The Fallout 4 Nuka Cola Quantum will be exclusively available via Target U.S.

The Fallout 4″ Nuka Cola Quantum is not the only drink fans can quench their thirst with as they get ready for the game. Beverage company Carlsberg and “Fallout 4” game developer Bethesda have collaborated into making into reality a beer that is inspired by the “Fallout” series. Simply called Fallout Beer, the beer packaging depicts a nuclear explosion event, with a mass of people heading to a vault. It has the subtext printed: “Inspired by Vault-Tec Industries.”

Fallout Beer is now available for pre-order via Amazon, and will start shipping on Nov. 5, five days before “Fallout 4” is officially released.

Carlsberg describes Fallout Beer as a drink brewed “using a unique blend of malted barleys combined with selected hops,” carrying with it the flavor of “a refreshing zesty hoppy taste and a floral aroma.”

Carlsberg’s Fallout Beer is available for 29.99 for 12 bottles of 330 ml each. The drink itself is not that strong, which only has an alcohol volume level of 4 percent.

“Fallout 4” will be available Nov.10 for the PS4, the Xbox One, and PC. Every physical pre-order copy will come with the “Fallout 4” Perk poster for free.