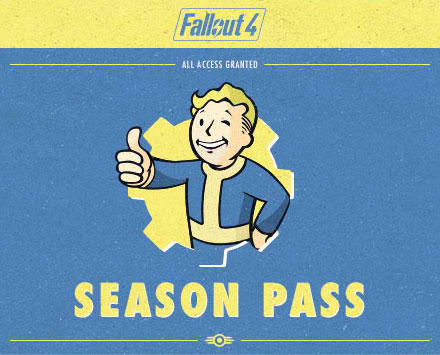 The Fallout 4 Season Pass, which will give access to all future DLCs of the as yet unreleased game, is now available for pre-order on the Xbox Store.

As announced by Bethesda’s Marketing Executive Peter Hines via his Twitter account, the Fallout 4 Season Pass is now available via Xbox.com and Xbox Live. The DLC Season pass can be pre-ordered for $30, which will give players all the upcoming DLCs for the game.

Steam (for PC) and PlayStation Network availability of the pre-order offer will be announced soon.

Additionally, the Xbox Marketplace also offers the Fallout 4 Digital Deluxe Bundle, a $90 package that comes with the full copy of the main game as well as a Season Pass offer.

While the Season Pass is now up for purchase, Bethesda has not yet announced any concrete DLC plans for the post-apocalyptic game.

“Since we’re still hard at work on the game, we don’t know what the actual DLC will be yet, but it will start coming early next year,” Bethesda previously said. “Based on what we did for Oblivion, Fallout 3, and Skyrim, we know that it will be worth at least $40, and if we do more, you’ll get it all with the Season Pass.”

“We’ve always done a lot of DLC for our games. We love making them and you always ask us for more,” they added.

In other news, Bethesda detailed in a video the game’s character system. As narrated by series executive producer and game director Todd Howard, the video explains that there are seven S.P.E.C.I.A.L. attributes, and a further 10 more per S.P.E.C.I.A.L. according to their rank.

“If you have the value, you can choose it,” explains Howard. “So if you come out of the Vault with ten charisma, you can pick the intimidation perk that lets you manipulate and control other people.”

Every physical pre-order copy will come with the Fallout 4 Perk poster for free.

Fallout 4 will be available on November 10th for the PS4, the Xbox One, and PC.