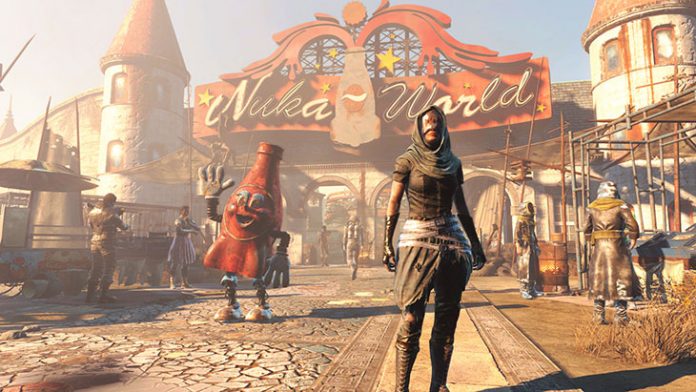 Finally, the game is on for the newest and most probably the last downloadable content (DLC) for the popular action role-playing video game, “Fallout 4.” The DLC, named Nuka-World, is the freshly launched expansion pack that provides a different kind of play with a different setting. Retailing for $20, the DLC is set in an amusement park called Nuka World, hence the title.

Although it’s been less than two days since its release, a lot of players have been scrambling to figure out how to access the new DLC and play the quests. And in response to the demand, game publisher Bethesda had no choice but to post step-by-step instructions via the company’s forums.

The first thing to do right before one can play the expansion is to check if the version of the game has been updated to the latest 1.7 patch. The player also needs to achieve at least level 30 before proceeding.

Here are the rest of the instructions from Bethesda:

First, from the main title screen, players should confirm that they have Nuka-World added and installed. Next, load up a saved game.

For players that have a Level 30 character or higher, they should receive the “All Aboard” questline automatically. This questline requires players to listen to Nuka-Cola Family Radio for further instructions.

On the other hand, if players are not Level 30 or higher, they will have to explore on their own to find the “Nuka-World Transit Center” and start the content. This location is far to the west on the map; outside of the original playable area. It can be located by following the more northerly of the two highways leading off of the west edge of the map. Some nearby Map Markers from the original game are “Lonely Chapel,” and “Federal Ration Stockpile,” these locations are just a bit to the east of the new “Nuka-World Transit Center” location.

Meanwhile, Game Rant also noted that once all the steps in the guide have been followed, the player has to option to explore the entire theme park and in the process begin playing several different quests scattered in the post-nuclear setting. This actually is one of the things Bethesda has been bragging about and because the expansion is still very fresh, players will have to wait a few more days to see if these quests are worth the hype.

'The Legend of Zelda' Wii U release news: Game conceptualized during...