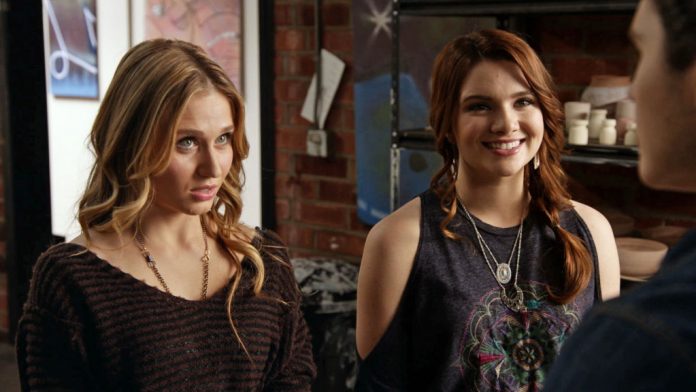 In the next episode of the second season of MTV’s “Faking It,” Karma (Katie Stevens) and Amy (Rita Volk) find themselves once again pretending to be a couple to attend a fundraiser set by Karma’s mother.

The official synopsis of the episode is “Karma and Amy attend Karma’s mom’s fundraiser while pretending to be a couple, but will Shane and Liam spill their secret?”

CarterMatt reports that the two women are faking it once again as Karma needs to please her mother who is a strong supporter of LGBT rights. Unlike before, however, Amy and Karma discuss more rules in order to convince people of their relationship better.

So, what could be the logic behind Karma’s decision to involve her friend into another ruse? CarterMatt in the same report writes, “Maybe Karma wants those feelings to come back subconsciously. We know what we saw that at the end of season 2A, and for the most part, this has not been picked up as a major story thread just yet in the second half of the season. Hopefully, it will be in due time.”

In the last GLAAD Media Awards, After Ellen interview Rita Volk and executive producer Carter Covington talked about the fate of Karma and Amy’s relationship, which has been dubbed by fans as Karmy or Army. Volk said, “That’s gonna start on a rough patch. When we left the last season, Karma was like, ‘I’m over it, and everything is OK’…and Amy doesn’t quite believe her.”

'Reign' season 4 spoilers: Queen Mary on a collision course with...