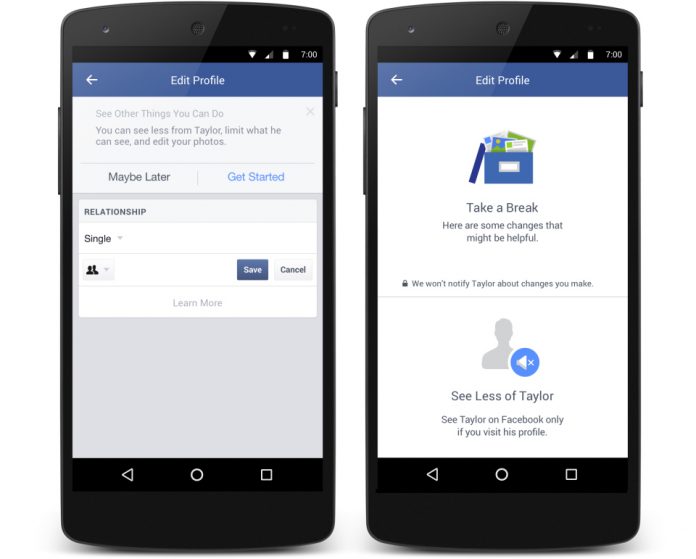 Posted last Nov. 19 in their newsroom website, Facebook announced that they are testing a new tool called “Take a Break,” which will allow users to further limit interactions with someone they may have romantically broken up with.

Kelly Winters, a product manager at Facebook, wrote, “Facebook is a place for sharing life’s important moments, which for many people include their romantic relationships. When a relationship ends, we’ve heard from people that they sometimes have questions about the options available to them on Facebook.”

When a user changes their relationship status from “In a relationship” to “Single,” a page will automatically pop-up, allowing users to choose from the following options:

The first option is to see less of a former partner’s name and profile picture around the social media platform without having to unfriend or block them. This will prevent the partner’s posts from showing up in the user’s News Feed and their name won’t be suggested when people write a new message or tag friends in photos.

The second option is to limit the photos, videos or status updates that a former partner will see.

The third option is to edit who can see their past posts with a former partner and untag themselves from posts with that person.

Since it is still in its testing phase, this new feature will only be available to Facebook mobile app users in the United States. If this idea receives a positive response, it will eventually be rolled-out to all users across the globe.

For many users, when someone wants to stop seeing any activity from a different person, they are limited to choosing from these two available options: to “block” the person so both parties will be totally out of reach through Facebook; or to “deactivate” their Facebook profile completely.

Winters acknowledged that a break-up may be a very difficult time in someone’s life. She said that they are hoping that Facebook users will find “Take a Break” helpful in managing and controlling how they interact online, especially with someone whom they chose to end a romantic relationship with.