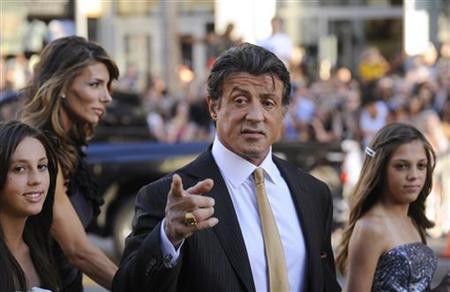 It has been a year since the release of Sylvester Stallone’s Expendables 3 film.

According to the Venture Capital Post, Stallone is eyeing former wrestling icons Dwayne “The Rock” Johnson and Hulk Hogan to appear in the fourth film in his franchise.

According to Hogan, he and the Rocky Balboa star had sat down and talked about his possible involvement in Expendables 4. The former wrestler admitted that his involvement could be hampered by difficulties in performing his stunts because of his age, but he added that it could be solved with the help of a good stuntman.

On the other hand, Cinema Blend reported that Johnson, who led the cast of this year’s disaster movie San Andreas, was asked in an Ask Me Anything (AMA) session about joining the cast of the Expendables films.

The wrestler turned actor was enthusiastic about adding his name to the actors who have appeared in the Expendables films, and even hinted that he wants to play a villain in the next film.

“I don’t want to be on their team and be buddies with them… I want to hunt every single one of them down,” the actor replied.

The Expendables franchise is a series of films about a team of mercenaries led by Barney Ross, played by Sylvester Stallone. Throughout the three films, several big-name actors have come and gone although main stays like Jason Statham, Randy Couture, Jet Li, and Arnold Schwarzenegger have appeared in all three films.

There has been no official update from Stallone about Expendables 4, although Movie News Guide revealed that Schwarzenegger and Statham are positive about doing a fourth Expendables film.

Master Herald noted that piracy, which resulted in a leaked copy of last year’s film appearing ahead of the release, is keeping Stallone from developing a new entry into the franchise.

'The Amazing Race' Season 27: elimination time for Alex and Adam;...