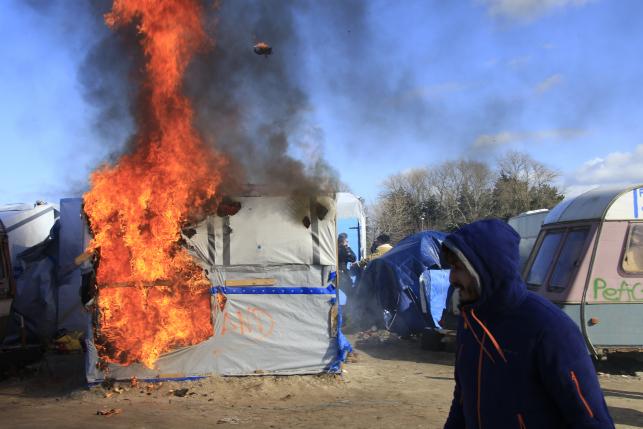 The French demolition squads were met by some resistance on Monday as they moved in the Calais refugee camp called “jungle.” Rocks were thrown at the squad by a few migrants and protesters in their hope to delay the eviction. The riot police pushed back the migrants by firing tear gas.

At least 12 shelters were set ablaze because of the riot. A total of 100 shacks, according to the BBC, were dismantled at the end of the day. Authorities reported that at least three people were arrested. There were no reports of injuries.

The camp provides homes to migrants coming from Afghanistan, Middle East, and Africa. They are hoping to cross The Channel to the U.K. Often, they resort to using human traffickers to help them enter the U.K. in illegal ways.

According to the Calais officials, the camp has 3,700 refugees. The camp lies in a former toxic waste dump on the outskirts of the area.

Government officials say that migrants are encouraged to move into converted containers in the northern sector of the camp, which can provide room for 1,500 people. But many are refusing to transfer since the new accommodation lacks communal spaces and restrict their movements.

There are also similar accommodation centers elsewhere in France. But others are fearing that they will be forced to claim asylum because of the government’s move.

“Going to Britain… is what people [here] want. So destroying part of the jungle is not the solution,” Afghan migrant Hayat Sirat told AP news agency as reported by the BBC.

Some believed that the camp’s squalid and sprawling presence had forced the government to clear up the area. It is a controversial issue in both France and the U.K.

Some charities tried to stop the demolition by filing a court petition, but it was rejected last week.

“It’s infinitely sad to see the waste of so much work that we’ve done in the past months,” said Maya Konforti of the Auberge des Migrants (Migrants’ Hostel) charity to Aljazeera.

For several months, volunteers and aid workers have tried to improve the condition of the camp.