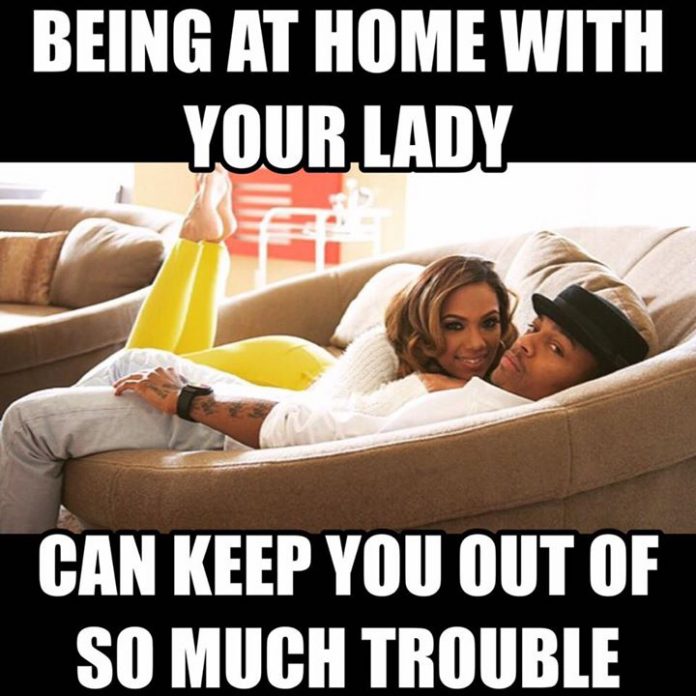 Bow Wow (Shad Gregory Moss) shut down rumors of a split from fiance Erica Mena in a Facebook post.

Plagued with numerous scandals in the past few weeks, rapper Bow Wow and fiance Erica Mena have had a lot to deal with. But on Monday, the rapper shared a photo meme of him and his lady love on his official Facebook page reassuring fans that all is well with them. The photo shows the engaged couple cuddling on a sofa and accompanied by text that reads “BEING AY HOME WITH YOUR LADY CAN KEEP YOU OUT OF SO MUCH TROUBLE.” This is the first picture of the two since breakup rumors emerged.

News that the couple’s relationship was on the rocks and the engagement was called off started when the “CSI: Cyber” actor openly criticized Mena on social media when the latter revealed that she had suffered a miscarriage five months prior on her Instagram.

Fuelling more rumors of the split was when Bow Wow was allegedly spotted hanging out with ex-girlfriend Angela Simmons in his New York Jets suite box during a Giants game nearly a week ago. The 28-year-old actor rapper was then quick to deny that he is back with the former flame explaining that it was purely a chance meeting and the interaction between them was strictly casual.

Mena on the other hand had some personal matters she had to attend to on her own. The former member of reality show “Love & Hip Hop” had a social media run in with new member Amber Laura. It started when Mena apparently tweeted and then later deleted “New season so I’m a rapper now/ manager / Oh and My Sister is dating my Gay Bff. Like let’s be serious here,” seemingly throwing a shade at Laura who had just discovered that her best friend and boyfriend are in a secret relationship.

The 28-year-old singer and rapper then retaliated with a remark about making it when “has been members throw subliminal tweets.” Surprisingly though, Mena backed down. “I may be criticized. I may be ridiculed. I may be despised. But I’m strong. So I laugh. I love. And I live,” she posted, and ending it with, “I don’t even say nothing and yet they sill involve me.”

Attack on Titan season 2: Spoilers point to death of key...