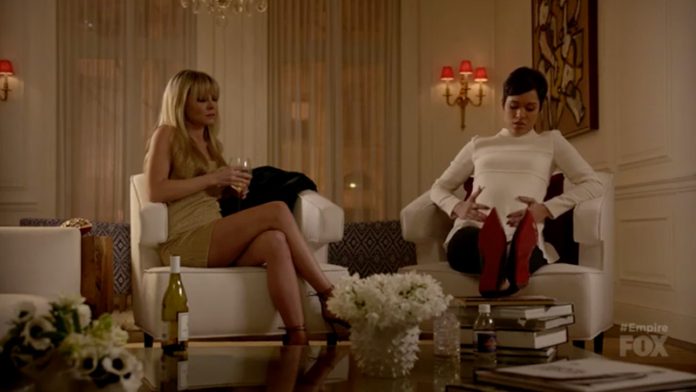 In true “Empire” fashion, the finale for season 2 did not come up short in terms of shock value. In fact, the show even gave fans to ponder on for the upcoming months before the show comes back for season 3.

In the most recent episode titled “Past is Prologue,” the squeaker from the first part of the sophomore run of the show has finally come into some developments albeit continuing the trend of cliffhangers. Mid-scuffle, Anika (Grace Gealey) finally admitted to Rhonda (Kaitlin Doubleday) that it was her that pushed her from the staircase which eventually becomes the reason why she and Andre (Trai Byers) lost their baby. After a couple of more name calling and rolling on top of a 30-story building, someone between the two of the ladies has presumably gone over the railing and fell off which may ultimately mean death for her. Unfortunately, as to who that could be, “Empire” saved it for its season 3 comeback later this year.

“We always knew that it was Anika who pushed Rhonda. And we were aware how many viewers were dead certain that it was Anika who pushed Rhonda,” Ilene Chaiken told TV Line. “But we did talk about whether it could be somebody else. There are certainly other characters in Empire who could have been culprits, given all the agendas and motives, and we could’ve done that just for the sake of defying audience expectations.”

Earlier this year and before “Empire” came back for the latter half of season 2, Doubleday already divulged that there were some back and forth in terms on who ultimately pushed her character in the midseason finale. She also promised that a confrontation will go down once the unknown perpetrator is revealed.

As for any ways of fans finding out who fell from the skyscraper, Chaiken said, “All we have to go on right now is the sound of that scream and the look on Andre’s face and that, to me, says somebody went over that railing.” This may potentially launch a thousand of theories online with fans hoping that there is some hint that will point them towards the victim of the latest tragedy of the show.

“It would be ludicrous to say that would be a survivable fall! [Laughs] We talked about how high up they are and we agreed it was somewhere around 30 stories. Assuming one of those ladies went over, she’s in for it,” she sheepishly teased.