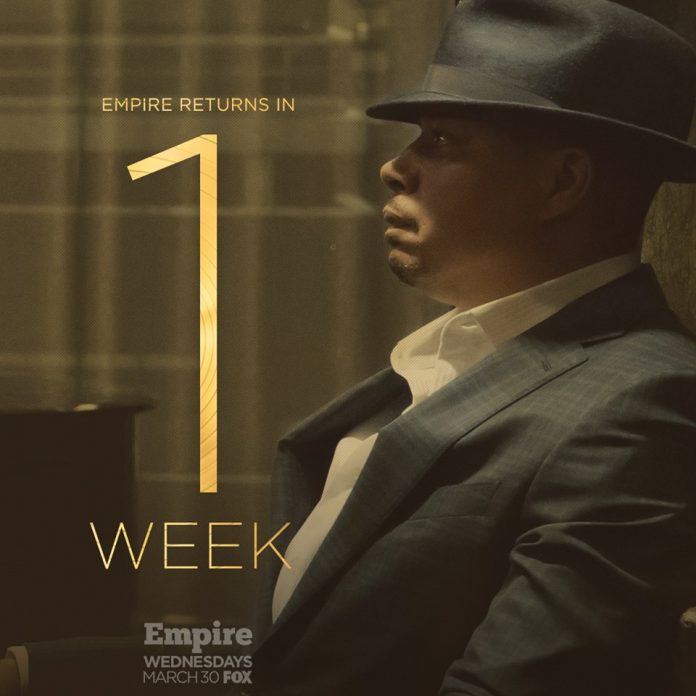 Fox’s hit musical drama series “Empire” returns from a short hiatus for season 2’s spring premiere next week, picking up from where the winter finale left off – with Lucious trying to get his company back and the Lyon family members dealing with more problems.

Titled “Death Will Have His Day,” the synopsis hinted that the aftermath of the previous events will unfold. “After losing the company he built, Lucious announces he will stop at nothing to regain his power, but Cookie has her own way of handling things. Meanwhile, Rhonda, Andre and the rest of the Lyon family come to terms with a horrific, life-changing tragedy that changes their lives as they know it,” it reads.

Kaitlin Doubleday, who portrays Rhonda, revealed in an earlier interview with TVLine that viewers will be shocked to find out who is the mysterious person who pushed her down the stairs.

“She realizes who pushed her and… she gets to confront [him/her] in a very dynamic, scary, insane, crazy way,” she teased. However, fans have to wait a little bit longer as the confrontation will appear in the later parts of season 2B.

Meanwhile, Bryshere Gray shared with Variety what he learned from co-stars Terrence Howard and Taraji P. Henson for his first acting gig as Hakeem Lyon.

The rapper turned actor stated that he was nervous during his audition for the role as he walked into a room full of Grammy-nominated and Oscar-nominated cast and crew members. Howeverm, Howard helped him, “Terrence pulled me to the side and said, ‘Look, you’re doing good, but you need to own it’ I took his advice, and now I’m on ‘Empire’ Season 2.”

“What I’ve learned from Terrence and Taraji is save your money! And if you ever feel embarrassed when you’re doing a scene and you feel like it shouldn’t be on camera, you should keep going,” he added.

When asked if he can give hints on what’s to come for the second half of the sophomore run, “We’re going to feed the hunger of what the fans want. They want drama, family, love and good music,” he replied.

'Outlander' season 2 news: behind-the-scenes look at a different world in...