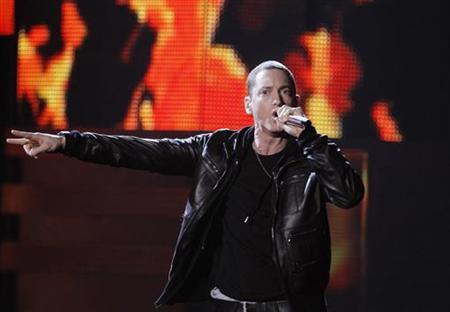 Rumors that Marshall Mathers aka Eminem is working on a new album has been around since last year when it was reported that he was working on an album called “Roots” which features Dr. Dre and Xzibit. Now, it has been over a year later and there is still no album to be found. Is there really an album in the works?

Reports say that the rapper is currently busy working on other projects and tours so he has little time to work on a new album. He has also been in talks with Paramount Television for a new series where he will act as the music supervisor as well as executive producer.

Sources also say that Eminem may be involved in the rumored film adaptation of a book one of his former bodyguards wrote. The book is told from the bodyguard’s perspective, however, the rapper may act in the film or even produce it.

That’s quite a hand full, but that’s not all he is doing.

Eminem is also using his celebrity status to help underprivileged children. Last month, he posted a message on his Instagram account to show his support for the kids.

Away from the limelight of his music career, Eminem is involved with the online shoe store StockX. He has also worked on the free mobile video game “Shady Wars,” which is actually based on the lyrics in his songs.

As of this moment, there seems to be no hint that the rapper may be working on an album.

Meanwhile, Reddit user and Eminem fan, Doogywassa, created a Wakalet where he compiled songs by Eminem. While the Wakalet has numerous categories under it, including Freestyles and Cyphers 19912016 and Guest Verses 20042016, the obvious thing missing is any songs that may give fans a hint that a new album is in the works.