Comedian and talk show host Ellen DeGeneres has opened up about the death of her former girlfriend decades ago, revealing how the tragic event inspired her big break in comedy.

Speaking with Dax Shepard in his “Armchair Expert” podcast Tuesday, DeGeneres shared that when she was 20 years old and working as a waitress in New Orleans, she lost her then-girlfriend in a car accident.

I was living with her when she was killed,” DeGeneres recalled. “I couldn’t afford to live where we were living together and so I moved into this tiny little basement apartment.”

The acclaimed comedian said her mattress was on the floor in the basement apartment, and it was infested with fleas.

“And I used to write all the time, I wrote poetry and songs and stuff, and I thought, ‘Why is this beautiful 21-year-old girl just gone and fleas are here?’” said DeGeneres.

The experience led her to create the material that she used for her first-ever stand-up performance, a set that eventually became her biggest break in comedy.

“It just unfolded, I just wrote the entire thing and when I finished, I read it and I thought, ‘Oh my God, that’s hilarious. I’m going to do this on Johnny Carson and I’m going to be the first woman in the history of the show be asked to sit down,’” DeGeneres recalled.

DeGeneres used the comedy routine she wrote when she made her first appearance on “The Tonight Show Starring Johnny Carson” in 1986 and was received very well by the audience and Carson himself. At the end of the routine, Carson asked DeGeneres to sit down with him on the set, and offered her an open invitation to perform at the late night show again.

During DeGeneres’ 60th birthday party in February, her wife Portia de Rossi proudly played that particular episode of “The Tonight Show” for their party guests. 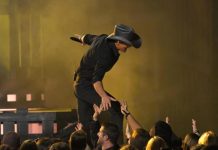