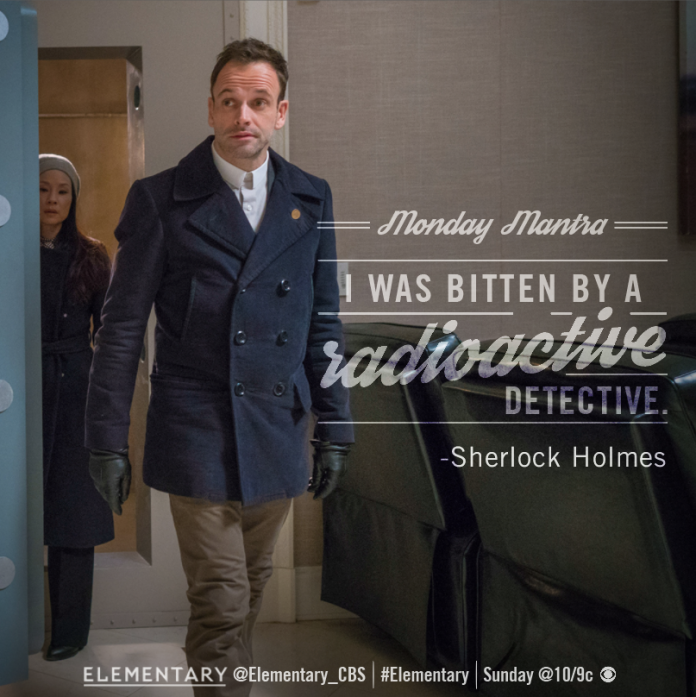 The new episode of CBS’ detective series “Elementary” season 4 will have Joan Watson (Lucy Liu) and Sherlock Holmes (Johnny Lee Miller) investigating what could be a fake double homicide.

Titled “Ain’t Nothing Like The Real Thing,” when the duo are pulled into the case, they will discover that the victims were actually staging a fraudulent death at the moment they were killed. The installment will also showcase Watson’s inside contact at Morland Holmes’ (John Noble) office encountering a problem that will threaten to expose her spying on Holmes and his father.

In a sneak peek released by the network, the narrator states, “When it comes to solving mysteries, Sherlock’s method can lead to madness.” Watson asks him, “Can you just say, I told you so like a normal person?” to which he replies, “Sorry, I can’t hear you over this Tahitian notes,” which leads to her walking out of the scene.

Down the pipeline, Sherlock’s father will become a prime suspect in a murder investigation after one of his employees gets killed.

In the episode directed by main cast member Liu, dubbed “Turn It Upside Down,” Morland will be under the scrutiny of his son and his trusty sidekick after what appears to be a robbery resulting to the death of a person.

Moreover, in the penultimate episode, Holmes and Watson will stumble upon the perpetrator behind the attempt made on Morland’s life. As they look in to the situation more, they will find a shocking connection to themselves. Titled “The Invisible Hand,” the episode will see a new face joining the ensemble.

TV Line shared that Scottish actor Tony Curran has been cast as economics professor Joshua Vikner who has a large role when it comes to Sherlock and Morland’s future as he has something to do with the villain Moriarty. He is also set to return for the season’s finale.