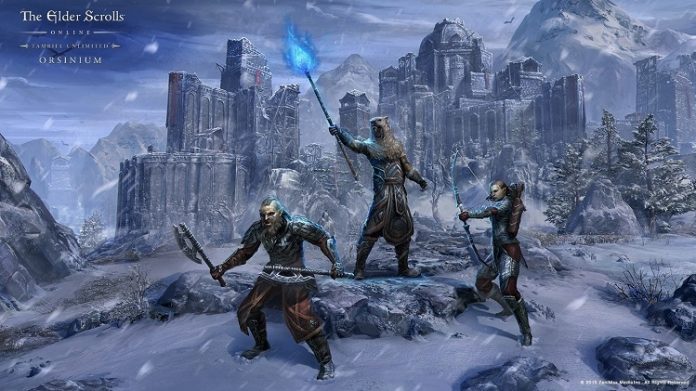 “Elder Scrolls Online” is treating fans next month with the release of the new downloadable content pack titled “The Elder Scrolls Online: Orsinium,” that is expected to be filled with more monsters, dungeons and the capacity to rebuild the titular legendary city.

Zenimax Studios took to their official website to announce the news, equipped with the description of the DLC which reads, “Orsinium, the ancestral home of the Orcs, is being rebuilt deep in the Wrothgar Mountains, and King Kurog has sent out a call across Tamriel for intrepid adventurers to assist in its rebirth. The latest DLC game pack for the award-winning The Elder Scrolls Online: Tamriel Unlimited takes you to the mountains of Wrothgar, and to the Orc capital itself, to unravel plots and counter-plots, and encounter all-new enemies and allies. Orsinium, ESOTU’s largest game pack to date, features a colossal new zone to explore, new quests and mysteries, a new single-player arena, new public dungeons, and much more!”

The content is said to include over 20 hours of gameplay which will see them fight adversaries in the public dungeons of Old Orsinium and Rkindaleft, while the result of their actions transforms the city. It is expected that the new places will be filled with gear and loot for players to discover and enjoy.

Described to be PVE contents, it does not matter what the level of the player is as new adventures and quest will still be accessible.

Meanwhile, aside from new missions, there will also be a single-player mode called the Maelstrom Arena where gamers can learn the culture of the Orcs and their ways for the Ancient Orc Crafting style, with six new world bosses, new powerful gear and taskmasters. The arena has nine combat rings and two difficulty levels.

The expansion pack also includes exclusive rewards which took inspiration from the history of Wrothgar.

The Elder Scrolls Online: Orsinium is free for those who have ESP Plus membership while for those who do not have a subscription, they have to shell out 3,000 crowns in the online game ESOTU Crown Store.

It will arrive starting November 2 for PC and Mac, November 17 for Xbox One and November 18 for Playstation 4.

How To Get Away with Murder Season 2 casting news: Kendrick...