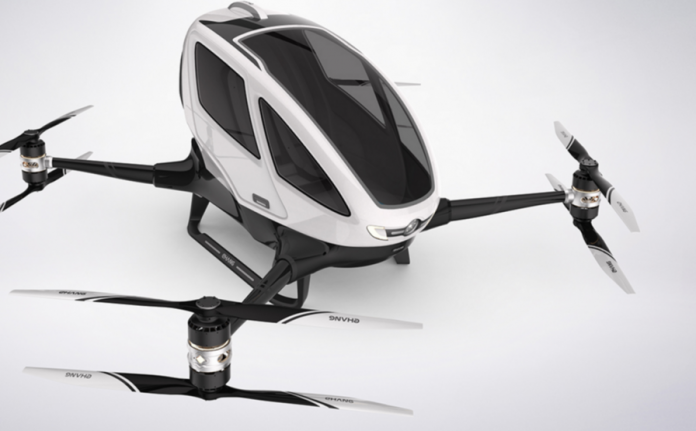 Chinese drone company Ehang believes their human-sized drone is the “future of personal transport,” revolutionizing the industry so that their mega drones can work as Uber-like vehicles.

All the passenger has to do is punch in the destination in the smartphone and sit back. The cockpit is empty save for a cup holder and a place to put a smartphone. There is no option to take control of the drone. If anything goes wrong, a pilot reportedly takes over from a remote command station.

As reported by TechCrunch, Ehang said that the automated aspect of the drone makes the machine safer by taking away “the most dangerous part of standard modes of transportation, human error.” The 184 has a few fail-safe systems put into place such as the aircraft landing immediately if a passenger’s life is at risk.

A release date has not been revealed by the company, and FAA regulators have not yet tested or approved its use in the U.S. A functional version of the 184 does not seem to be appearing in the country anytime soon.

Although Ehang has claimed that the 184 has had successful flights, no footage of the flying drone has been seen with a real human inside.

Fitz Tepper, a writer at TechCrunch, believes that the Ehang 184 is simply a “marketing tool” for their more standard-sized drones like the Ghost.

Meanwhile, other big companies view “autonomous aircrafts” as a wave of the future. Amazon, for instance, is looking to designate different altitudes for various drone activities. One altitude will be purposed for people-carrying drones while in other levels, the drones will carry packages to customers.