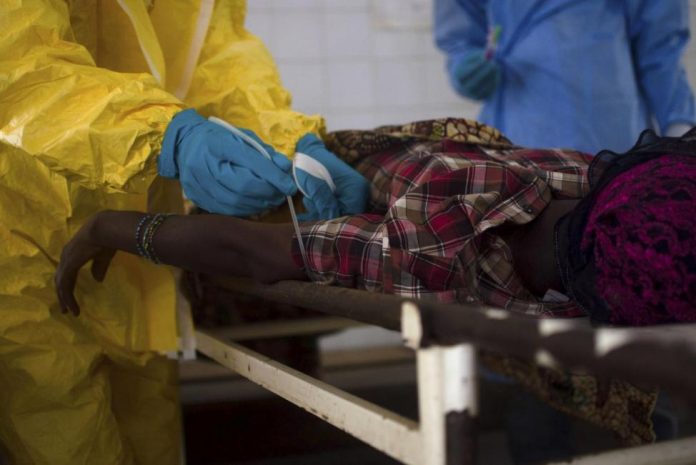 Sexual transmission of the Ebola virus was confirmed between a disease survivor and his female partner at a genomics laboratory in Liberia, established by the United States Army working with the Liberian Institute for Biomedical Research.

A statement from CPT Suzanne Mate, PhD, of the United States Army Medical Research Institute of Infectious Disease or USAMRIID appears in Science Daily news, telling of the EBOV-positive analysis of blood samples from a female patient on March 20, a time when no new cases had been documented for 30 days. With no exposure to anyone with symptoms of the disease, her only link to Ebola was her partner, an Ebola virus disease survivor discharged from a treatment center five months previously, and with whom she had unprotected intercourse. He had been EBOV-negative since early October 2014.

EBOV survives in semen months after patient recovery, up to 101 days – or roughly three months – after the onset of symptoms. And because a distant relative of the EBOV, the Marburg virus, was shown to be sexually transmitted, it was also believed possible for EBOV. This was the basis for the recommendation by the World Health Organization and the Centers for Disease Control and Prevention that EVD survivors abstain from sexual contact or use condoms during sexual intercourse at least three months after EVD onset, as the New England Journal of Medicine reports.

In view of this recent finding, the recommendation has since been changed, even though data has been scarce on the subject and often inconclusive.

After the female patient died on March 27, a semen sample obtained with consent from the surviving partner tested positive. An enrichment strategy was also used to identify a more complete genome analysis, Michael Wiley, PhD, of USAMRIID explains in the report released by USAMRIID, and comparison with the results of blood analysis in the female patient revealed three shared genetic substitutions not observed in any virus sequences from Western Africa. These were also different from the transmission chain in Liberia prior to this case.

These recent findings support the sexual transmission of EBOV and the presence of infective EBOV in semen for longer than 179 days (almost six months) after the onset of the disease. With this evidence, the WHO and the Centers for Disease Control changed their recommendations with respect to sexual contact by convalescing patients.

The Ebola virus causes severe hemorrhagic fever and subsequent high mortality rates. EVD is still emerging in new locations. WHO reports figures in Liberia, Guinea, and Sierra Leone 11,000 reported deaths and 28,000 cases have been confirmed, or are probable or suspected.

In an editorial accompanying research published in the NEJM, Armand Sprecher, public health specialist, Mdecins sans Frontires, writes, “The challenge with sexual transmission is not that it would be a source of many new Ebola virus disease cases, but that it may be a source of late cases.”