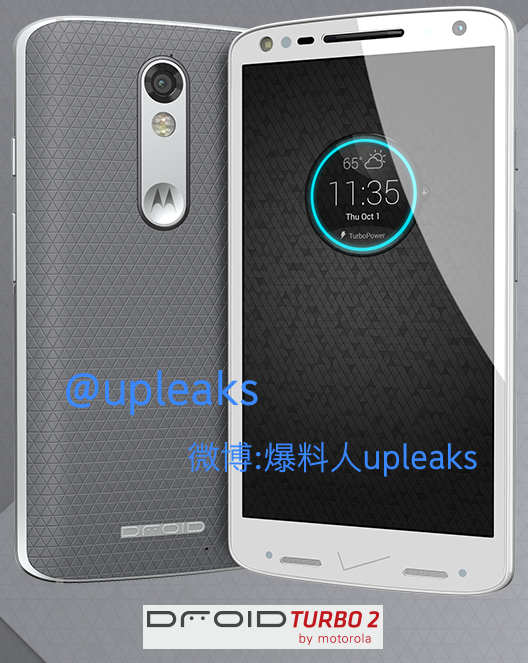 With the competitiveness and success of Motorola DROID Turbo, it is not a surprise that a DROID Turbo 2 is on its way. Initially speculated to be launched on October 15, Geek Snack confirms that the handset will be released on October 27 through a special event.

There are already several rumors regarding the specifications making the rounds on the internet. For one, the device is said to be coming at 5.4-inch Quad HD resolution at 1440×2560 pixels. It will be powered by a Qualcomm Snapdragon 810 octacore along with a 3GB RAM and an option of either a 32GB or 64GB internal storage. The Motorola Droid Turbo, which came with a hefty battery life of 3900 mAh last time, will come with a slightly lower capacity at 3760 mAh for DROID Turbo 2. Although this is a slight decrease from its previous battery capacity, the impact should be negligible and the device still offers good battery since most of the smartphones on the market offer less than 3000 mAh. For its camera, the rear shooter is anticipated to come in either 21 or 23 megapixels with optical image stabilization and laser focus, while its front shooter may come at 5 megapixels.

Aside from the remarkable features, Motorola DROID Turbo 2 is also expected to come with gesture controls and software features, along with Android Marshmallow 6.0. Cost-wise, the handset is expected to be around $640. DROID Turbo 2 will be Verizon-exclusive in the United States, but there will also be an international version called Moto X Force.

The invitation for the event two weeks from now did not spill as to which devices will be launched, but Geek Snack believes that there will be multiple handsets on the way. It believes that this will include DROID Turbo 2 and DROID Maxx, along with another phone, which is currently unknown. In the meantime, fans will just have to wait in about 10 days for its official launch.

'The Elder Scrolls 6' release date: rumored title emerges, but does...