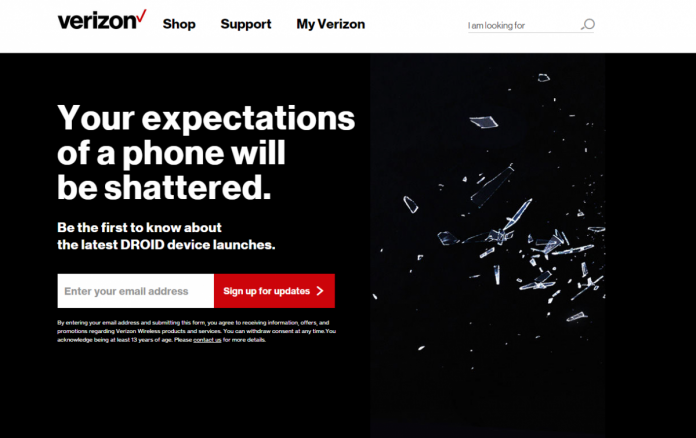 Motorola, via Verizon, will be holding a DROID launch event on October 27.

The rumored Droid Turbo 2, as well as the Droid Maxx 2, are both expected to be launched on that day.

In addition to this, the mobile carrier also teases that users’ “expectations of a phone will be shattered”, in connection to their upcoming DROID device launch. An image of a shattered glass can be found beside it. Could this be a hint of the rumored shatter proof Droid Turbo 2?

Droid Turbo 2, or also known as the Moto X Force, will sport a 5.43-inch display with 1440×2560 Quad HD resolution, with a shatter-proof display make. It will run under an octa-core Snapdragon 810 processor with a 2GHz CPU clock speed. It packs a 3GB worth of LPDDR4 RAM, along with two variants of either 32GB or 64GB worth of built-in internal storage capacity. The storage will be expandable, as the device is said to have support for an external microSD expansion.

The Moto Maker personalization feature is rumored to be incorporated into the Moto X Force.

The Droid Maxx 2, or the Moto X Play, as it was originally called when it was launched, sports a 5.5-inch display with 1080p Full HD resolution and Corning Gorilla Glass 3 protection, and an IP52 certified water repellent nano-coating. It runs under an octa-core Snapdragon 615 chip, with two quad-core CPUs clocking in at 1.7GHZ and 1.0GHZ each. As for the graphics, it has an Adreno 405 GPU. It packs 2GB worth of RAM inside, with options between 16GB and 32GB worth of built-in internal storage, and support of an external microSD expansion.