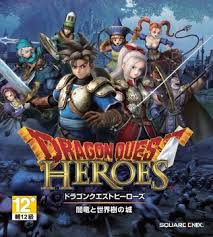 Dragon Quest Heroes will be released in North America on October 13 and United Kingdom on October 16.

Square Enix, publisher of the game, announced that the game will come in two editions, namely Day One Edition and the Special Collector’s Edition. Day One edition, available for pre order in most retail stores, will feature 11 exclusive in-game items to equip players on some battles such as Slime Sword, Goomerang, Squishing Rod, Gungenir, and Gooey Gloves. The Collector’s Edition, on the other hand, will be available solely from Square Enix stores, and will additionally have Slime chain, Slime push dolls, Slime lanyard which are packaged on a treasure box, as well as quest items such as the Gold digger’s map and Happy map on top of the 11 items.

The game will have several characters from all eight Dragon Quest games. Additionally, it will introduce two new characters, Aurora and Luceus, to team up with the rest in their bout with the army of ghouls, skeletons, golems, and slimes. Players must learn the special powers and strengths of each character and how they will play their role in the quest to secure wins. The characters from playable cast are also capable of upgrading their abilities as well as have monsters as allies, which could ease more challenging battles.

Dragon Quest Heroes is the shortened original title of Dragon Quest Heroes: The Dark Dragon and the World Tree Castle. It is a hack-and slash mix of gameplay from Koei Tecmo’s Dynasty Warriors featuring characters from Square Enix’s Dragon Quest series. It was initially released late February in Hong Kong, Japan, and Taiwan for Play Station 3 and Play Station 4. The Day One edition is sold at $59.99 while the Collector’s Edition is priced at $100. Players have the option of retaining to its standard edition at $60.

WildStar closed beta launches for new and old subscribers ahead of...