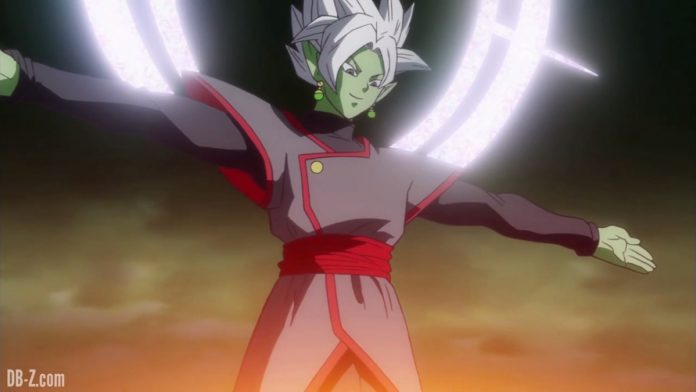 Looks like the Mafuba jar isn’t going to be a factor moving forward. How in the world could they forget to bring the paper amulet needed to complete the seal? Future Trunks may have succeeded in using the Mafuba on Zamasu, but without the seal, the villain managed to escape from the container. This made Zamasu and Black Goku realize that they should not underestimate their opponents so they fused. Things look bad for the heroes right now.

Titled “Final Judgement! The Supreme God’s Ultimate Power,” episode 65 will feature a fused Zamasu/Black battling Son Goku, Vegeta, and Future Trunks. As seen in the preview, the fused villain emitted some sort of light that made Goku and Vegeta stagger. If that was powerful enough to affect them just imagine what an attack could do. Can they find a way to defeat such an immense power?

Sources say Goku and Vegeta may have a plan, but it won’t happen until episode 66. The two are allegedly going to fuse themselves with the help of Gowasu and Shin. Both Supreme Kais already have Potara earrings in their possession so that is certainly a possibility.

Will Vegeta do it? It should be noted that this type of fusion is permanent. The last time they fused into Vegito, they were lucky the fusion got dissolved when Super Buu absorbed them. Are they going to risk that again?

The two Saiyans will have to do something to counter the merged Zamasu/Black so this is a solid plan, albeit with a lot of risks involved. Anyway, the Supreme Kais may know some way to defuse the fusion since Shin managed to split with Kibito.

The heroes are going to have their hands full in episode 65. One of the scenes in the preview even shows Goku and Vegeta lying on the ground seemingly defeated.