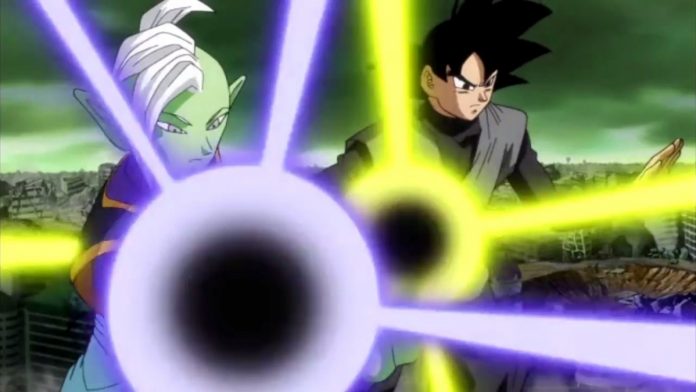 Wait, what? So the body Black Goku currently uses is Son Goku’s real body? Not some clone that Zamasu wished for? The previous episode did not disappoint as Black’s secrets were slowly revealed. Apparently, Zamasu collected the Super Dragon Balls and made a wish to exchange bodies with Goku. And after switching bodies, he killed the real Goku.

So, that means Goku, Vegeta, and Future Trunks actually have to battle two Zamasus, although they are from different timelines. It makes sense since Zamasu and Black have the same Ki aura and techniques. Both of them do enjoy using the energy blade attack.

Titled “Zamasu’s Ambition: Presenting the Terrifying 0 Mortals Plan,” next week’s episode will be a battle royal between the fearsome duo and the heroes. Sources say Zamasu will explain that it is his duty to annihilate all mortals so that evil will cease to exist.

Furthermore, there are rumors swirling around that say Zamasu and Black may finally fuse in the upcoming episode. Meanwhile, some fans believe that a new Super Saiyan form called Super Saiyan Green may be introduced in the series.

For some reason, there are also numerous reports saying Black may be Goku’s long lost twin brother even though Black has already revealed that he switched bodies with Goku in the previous episode.

The body switching plot is like the Frieza Saga all over again. When Ginyu fought Goku, he realized that Goku was stronger than he was so he came up with a plan to swap bodies with his opponent. The plan worked initially, but Ginyu did not know how to use Goku’s body and he was beaten to a pulp by Vegeta. Unlike Ginyu, Black has shown that he knows how to use Goku’s body and that makes him dangerous.

Readers are advised to take everything with a grain of salt as details for the next installment have yet to be revealed.