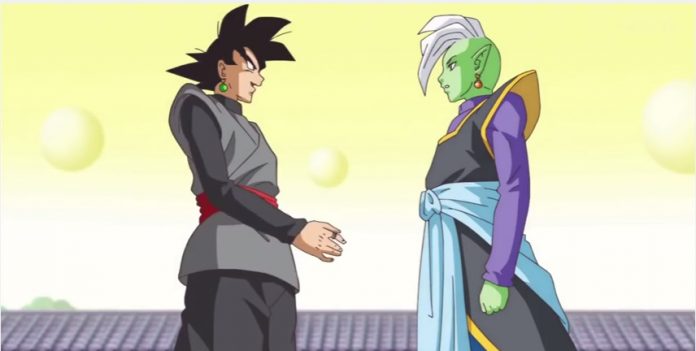 The rumored fusion between the two current villains, Zamasu and Black Goku, is deemed to take place in the upcoming episode 61 of anime series “Dragon Ball Super.”

According to reports, the aforementioned event has been teased since the start of the Future Trunks arc. Some fans apparently noticed that both antagonists are wearing green Potara earrings. In the preview, the mysterious item can be seen glowing as Zamasu attaches it to his ear.

The footage also hints at a rematch between the two big bads and the heroes, specifically Son Goku, Vegeta and Future Trunks. However, their battle will be challenging as Zamasu has an immortal body while Black Goku can transform into Super Saiyan Rose. They are said to be really powerful as individuals and if they fuse, they can potentially become unstoppable.

Presumably, in order to conquer them, there is hearsay that another Super Saiyan form will make its debut. It is suggested that Son Goku may transform into the touted Super Saiyan Green form equipped with great abilities and power. However, it remains to be seen if it comes to fruition.

Episode 61 is titled “Zamasu’s Ambition/The Human Elimination Plan Divulged.” It may also reveal that Zamasu’s main objective is to annihilate the human race.

Moreover, episodes 62 and 63 are deemed to be dubbed “Trunks’ Super Power!” and “Vegeta’s Fierce Battle,” respectively. The former hints on Trunks’ possible acquisition of energy and strength that will be greater than his current Super Saiyan 2 form. Meanwhile, the latter may focus on Vegeta’s attempt to take matters into his own hands and defeat either Black Goku or Zamasu.

Since there are no official synopses yet, available information should be taken with a grain of salt. Episode 61 is expected to air this Sunday, Oct. 9, followed by episode 62 on Oct. 16 and episode 63 on Oct. 23.

'Descendants of the Sun' season 2 rumors: a new set of...