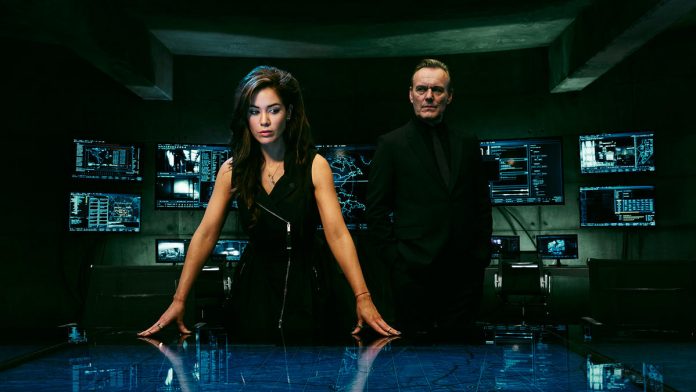 Season two’s premiere episode of Syfy’s post-apocalyptic supernatural series, “Dominion,” has aired on July 9 and viewers got a fair share of both action and drama.

Seemingly addressing the issue some fans that season one was mostly confined inside Vega, “Heirs of Salvation,” made the characters venture out of the city’s walls.

Picking up two months after the finale, Alex is still a prisoner of Gabriel and he does not have any development when it comes to deciphering his markings. Meanwhile, Michael wanders in the wilderness after abandoning the city where Claire took over as the new leader alongside the devious David Whele.

Actor Anthony Head who plays Whele hinted to TVLine that his character and Claire may clash sooner than expected, “It’s extremely accurate. Bottom line is that David saw her as a leader-in-the-making that he could school, manipulate and run rings around. But she is the Democrat to his Republican, and she is very much aware of the damage that the V system does, the fact that it’s an antiquated system. It was something that her father brought in right at the beginning just in order to establish Vega and it’s been kept in place by people like David Whele, for whom it works very well.”

What may come as one the most interesting points in the episode was when Vega and Helena’s military forces dropped a bomb at Gabriel which may set the framework for impending battle between Claire and the surviving angels, IGN reports.

Moreover, Alex and Noma continues to trek to New Delphi. While searching for supplies in an abandoned school, they were targeted by 8-ball. Alex showed that his powers have advanced as he can remove his adversary without killing the host.

Michael stumbled upon the town of Mallory where people believe in the power of faith. His discovery made him reconsider his views after he abandoned his position in Vega and killed people who were experimenting on his kind.

Episode two titled “Mouth of the Damned” will air on July 17. The official synopsis reads, “The mysteries of Mallory deepen as Michael struggles to keep his secret, while Alex’s problems in New Delphi are just starting.”