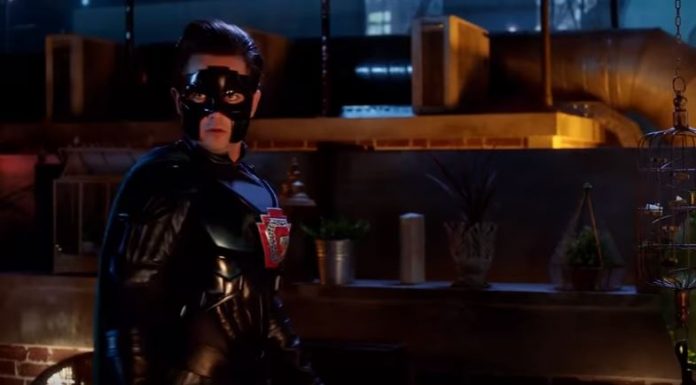 Before “Doctor Who” returns for its 10th season, the hit BBC series will air the show’s Christmas special which shows Peter Capaldi’s Time Lord teaming up with a superhero Doctor Mysterio.

A first-look clip revealed that the Doctor will be heading to New York in the Tardis and will work with an investigative journalist played by Charity Wakefield and a mysterious comic book superhero named Grant (Justin Chatwin) in the special episode titled “The Return of Doctor Mysterio.”

The clip opens with the Tardis landing in New York City and Matt Lucas, who plays Nardole, holds up a sign which says “Happy Holidays from Doctor Who!” Capaldi is seen in costume and sitting on a fire escape while talking Chatwin who’s dressed in a checked shirt, dark trousers, and eyeglasses. Later, viewers see a stunned Time Lord as Grant hands his glasses to him, and it appears as though he has revealed his alter ego as the Doctor gazes open-mouthed at the sky. Chatwin is seen in his Doctor Mysterio costume as he gets directions for a scene. It appears that he’ll be shoving someone, likely the bad guy, using his powers as the Doctor and Nardole look on.

Showrunner Steven Moffat spoke with BBC about the Christmas special and said that he has always loved superheroes.

“I’ve always loved superheroes and this Christmas ‘Doctor Who’ dives into that world,” said Moffat. “My favorite superhero is Clark Kent. Not Superman, Clark Kent.”

Chatwin, who previously teased his involvement in the “Doctor Who” special on his Twitter account, took to the microblogging site on Friday, Oct. 7 and revealed that they have just wrapped the special episode in Wales.

“One of the best times I’ve had making something,” said the actor.

Along with Capaldi, Chatwin, and Lucas, the “Doctor Who” Christmas special will also star Adetomiwa Edun, Aleksandar Jovanovic, and Logan Hoffman.

The hour-long “Doctor Who” Christmas special will air on BBC One on Christmas Day.

'Jill and Jessa: Counting On' news: Spinoff gets a full season,...