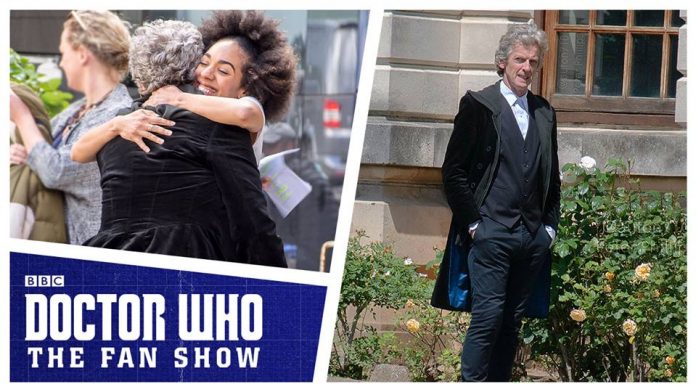 “Doctor Who’s” forthcoming 10th season is still a couple of months away from airing. But while fans are primarily excited with the new companion of Peter Capaldi’s Twelfth Doctor, Bill, played by Pearl Mackie, it appears that there are still a couple of new things the upcoming installment will offer its viewers including the famous TV icon sporting a slightly different look.

In a brand-new photo posted on the official Instagram account of “Doctor Who,” Capaldi is seen signing some autographs. It is accompanied by the caption, “Here’s Peter hanging out with some fans on a break in filming for episode 1 of the new series!”

At first look, the Scottish actor looks like his normal time travelling character, a particular appearance that he has been for a couple of years now. However, media publication Radio Times notes that he is sporting a slightly longer coat than usual, which is reminiscent of what he was wearing back in season 9’s finale “Hell Bent.” Matching his grander outerwear is a baggier grey hoodie, a different hue to his usual choice of blue.

On top of that, the article also cites that the Doctor’s whole ensemble is complete with a full suit and a white shirt, which is said to be a first. Capaldi usually opts for extra insulation from just a simple white T-shirt.

The tweaks in the Doctor’s wardrobe may be explained by Mackie’s previous updates on the production of the show. Last month while doing a short tour of the set on her first day for her new gig, she said, “Look, it’s snowing in June,” which may mean that while they are filming during the summertime, “Doctor Who” season 10 will be set in sometime in the winter or at least some part of it will be.

“Doctor Who” season 10 has yet to have a specific air date but will likely return in 2017. Before that, fans can expect the Doctor in his annual Christmas special airing on Dec. 25 on BBC.