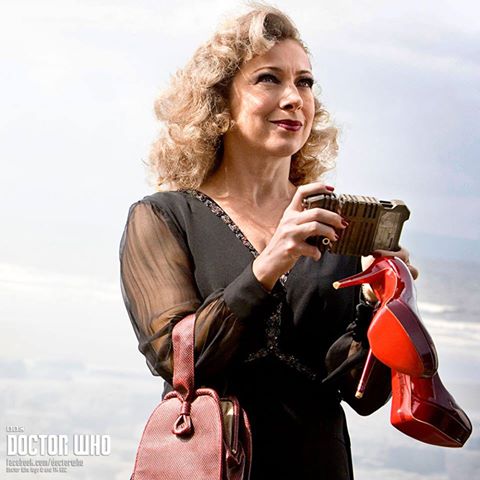 Viewers of BBC One’s science-fiction series “Doctor Who” will see a familiar face returning to the small screen for its highly anticipated Christmas special episode titled “The Husbands of River Song.”

The network recently revealed that recurring guest star Alex Kingston will reappear as River Song, the time-travelling wife of Peter Capaldi’s Doctor Who. She is also the daughter of former companions Rory and Amy Pond, played by Arthur Darvill and Karen Gillan, respectively.

The synopsis of the episode revealed that she will be fighting with the Doctor against Greg Davies’ King Hydroflax and his giant Robot bodyguard which is out of control. The full synopsis reads, “It’s Christmas Day on a remote human colony and the Doctor is hiding from Christmas Carols and Comedy Antlers. But when a crashed spaceship calls upon the Doctor for help, he finds himself recruited into River Song’s squad and hurled into a fast and frantic chase across the galaxy… Will Nardole (Matt Lucas) survive? And when will River Song work out who the Doctor is?”

River Song first appeared in 2008 for “Silence in the Library” and “Forest of the Dead” when David Tennant portrayed the titular role. Since they are both time-travellers, Tennant did not recognize her as his wife. However, for her, they already spent time together. She has appeared in 15 episodes since, and her last knowledge of her husband’s reincarnation was Matt Smith.

It remains to be seen why she does not know who the Doctor is but lead writer and executive producer Steven Moffat teased, “The last time the Doctor saw her, she was a ghost. The first time he met her, she died. So how can he be seeing her again? As ever, with the most complicated relationship in the universe, it’s a matter of time…”