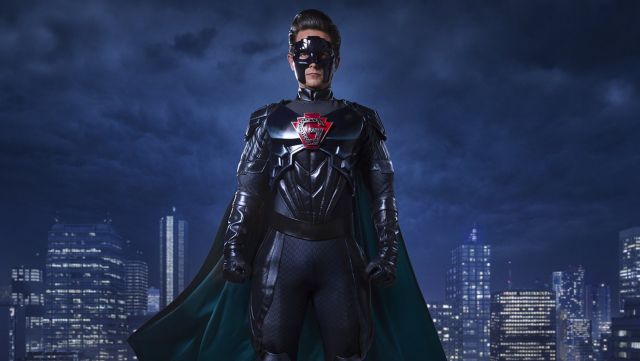 “Doctor Who” may not be coming out until next year but the traditional holiday special is scheduled to launch before 2016 ends to hopefully tide over longing fans.

The British cult TV series will be bringing back Peter Capaldi as the Twelfth Doctor for the Christmas offering titled “The Return of Doctor Mysterio.” The announcement of the title came with an image of the insignia for upcoming guest star Justin Chatwin who is tipped to play the titular character. So far, no other information is available for the episode. The installment marks the first new content for “Doctor Who” since wrapping up season 9 back in early December of last year followed by the annual holiday bonanza in “The Husbands of River Song.”

However, since its release will be coming soon, BBC is slowly opening the floodgates for its marketing push starting with the first official look at the special episode. There are reports suggesting that on Nov. 18, 7 p.m. GMT, BBC One is tipped to release a trailer for the installment.

Unfortunately, “Doctor Who” newbie and the Doctor’s latest companion, Bill, played by Pearl Mackie, will not be part of the standalone spectacle. Instead, Nardole (Matt Lucas) will be assisting the Time Lord.

Meanwhile, former Doctor Matt Smith was once again asked if he is willing to go back to TARDIS and reprise his breakout role. Talking to Entertainment Weekly while doing the press rounds for his newest gig, Netflix’s “The Crown,” the British actor addressed rumors of him coming back to reprise the iconic character.

“There are rumors that I’m coming back?” he said. “There’s always rumors. I don’t know…I haven’t been approached. I would consider any approach and take it very seriously.”

Nevertheless, given that he is admittedly a huge fan of the show, he gave some insight on how to make the mercurial role work.

“Listen to no one. There’s so many opinions out there and you’ve got to filter so many of those voices out. On that show, you’ve got to have a clear vision and Peter obviously does. He’s wonderful,” Smith said.

“Doctor Who” season 10 is scheduled to launch in April 2017 while the Christmas special is tipped for a Dec. 18 release.

'The Vampire Diaries' season 7 spoilers: Damon tries to save Bonnie...