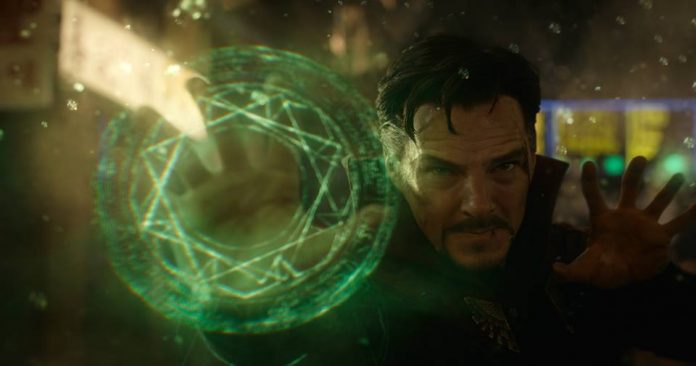 Marvel Studios’ marketing has let go of its brakes as “Doctor Strange” nears its release in early November. Aside from promo clips and posters, folks involved have been heavily active in promotional activities enough to hype up fans for the newly flavored flick.

Aside from escorting the ever-expanding Marvel Cinematic Universe (MCU) in the realm of mystical arts, the origin story of Stephen Strange, played by Benedict Cumberbatch, will take on the standard formula from the comic book company.

So far, trippy has been used to describe what “Doctor Strange” looks like far many times and it is exactly what it is. The movie is a melding of worlds between superheroes and the mind-bending genre laced with patented Marvel humor. Production company president Kevin Feige confidently told Collider that Strange’s origin story rivals that of Robert Downey Jr.’s Iron Man which says a lot especially with how Jon Favreau’s 2008 project launched a now $10 billion empire.

“His origin has always been, like Tony Stark’s, relatively stable, relatively consistent, and we’re certainly pulling from that the arrogant New York neurosurgeon, who’s a bit of an ass, who’s extremely arrogant, and who has a horrible accident, mangles his hands his tools and who loses his identity and loses himself, and has a nice downward spiral, before finding his way in a last-ditch effort in something he doesn’t really believe into Nepal, to the people who he will encounter and who will teach him and open his eyes to a whole other reality,” he said.

Feige’s comments make the rumored Stark cameo in the forthcoming flick more interesting particularly since the two well-known gentlemen both round the circles of New York elite.

Despite being his debut film, Cumberbatch’s on-screen persona is already deeply tied to the overall MCU realm. In fact, the Avengers were even referred to in the latest “Doctor Strange” TV spot just to put things into perspective.

As it turns out, while Earth’s mightiest superheroes were busy saving the planet, Strange, with his new band of friends including Tilda Swinton’s the Ancient One, Benedict Wong’s Wong and Chiwetel Ejiofor’s Baron Mordo, is busy saving the realm of reality. Despite the separation, plot lines will eventually get pulled together with the character’s confirmed involvement in the spectacle that is “Avengers: Infinity War.”

This makes sense as the movie is highly tipped to feature the remaining two Infinity Stones that have yet to make an appearance. As previously revealed, the gems will be the central focus in the upcoming project from the Russo brothers with Josh Brolin’s Thanos racing against Marvel superheroes to get a hold of the powerful gemstones.

Since its confirmation back in 2014, Feige has been adamant that the introduction of Doctor Strange in the MCU will open a world that has yet to be tapped in their almost decade-old franchise. So far, that is what it looks like but for those who are still skeptical about the new superhero in town, Feige and Marvel Studios are cooking up a sneak peek that might just finally sell the concept.

The theatrical sneak peek of IMAX footage will be will be shown in 117 theaters nationwide on Oct. 10, 7 p.m. local time. Titled “Expand Your Mind: An IMAX 3D Exclusive First Look,” the event will include a 15-minute clip from the film which serves as an appetizer for the almost two-hour treat.

Helmed by director Scott Derrickson and penned by Jon Spaihts and C. Robert Cargill, “Doctor Strange” is scheduled to arrive on Nov. 4.