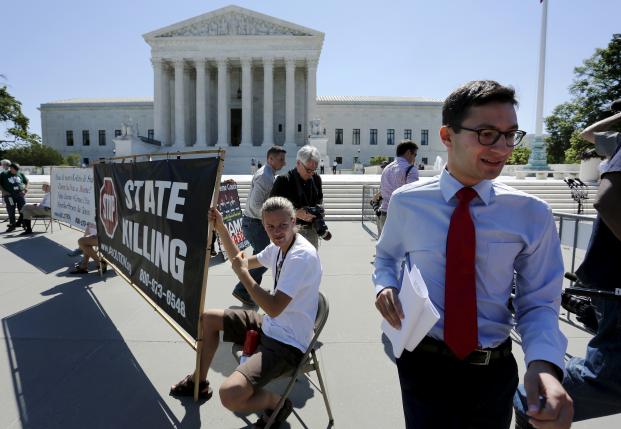 The Supreme Court on Monday found that a lethal injection drug used by Oklahoma does not violate the U.S. Constitution’s ban on cruel and unusual punishment, a ruling that provoked a caustic debate among the justices about the death penalty in America.

The 5-4 ruling, with the court’s five conservatives in the majority, prompted liberal Justices Stephen Breyer and Ruth Bader Ginsburg to say for the first time they believe capital punishment as currently practiced may be unconstitutional. They are the only members of the court to have expressed such views.

The decision was a defeat for death penalty foes and for the three death row inmates who challenged the use of a sedative called midazolam as part of Oklahoma’s lethal injection process, saying it cannot achieve the level of unconsciousness required for surgery, making it unsuitable for executions.

Justice Samuel Alito wrote on behalf of the court that the inmates had, among other things, failed to show there was an alternative method of execution available that would be less painful.

The inmates failed to demonstrate that “any risk of harm was substantial when compared to a known and available alternative method of execution,” Alito said.

Alito also wrote that it was reasonable for a lower-court judge to find that midazolam is “highly likely” to prevent an inmate from feeling pain during an execution. Numerous courts have ruled similarly, Alito noted.

Although the case did not specifically address the constitutionality of the death penalty in general, it brought fresh attention to the ongoing debate over whether the death penalty should continue in the United States at a time when most developed countries have abandoned it.

In his dissenting opinion, Breyer said the court should consider whether the death penalty itself is constitutional. He was joined by Ginsburg, but not his other two liberal colleagues.

The main question before the nine justices was whether the use of midazolam violates the Constitution’s Eighth Amendment prohibition on cruel and unusual punishment. The drug has been used in executions in Oklahoma, Florida, Ohio and Arizona.

“We believe it highly likely that the death penalty now violates the Eighth Amendment,” Breyer said in a statement he read from the bench.

The three-drug process used by Oklahoma prison officials has been under scrutiny since the April 2014 botched execution of convicted murderer Clayton Lockett. He could be seen twisting on the gurney after death chamber staff failed to place the intravenous line properly.

Inmates Richard Glossip, John Grant and Benjamin Cole – all convicted murderers – challenged the procedure. Glossip arranged for his employer to be beaten to death. Grant stabbed a correctional worker to death. Cole killed his 9-month-old daughter.

Liberal Justice Sonia Sotomayor said the inmates “contend that Oklahoma’s current protocol is a barbarous method of punishment – the chemical equivalent of being burned alive.”

“But under the court’s new rule, it would not matter whether the state intended to use midazolam, or instead to have petitioners drawn and quartered, slowly tortured to death, or actually burned at the stake” because the inmate failed to prove the availability of an alternative, Sotomayor said.

During the court’s oral argument on the case in April, Alito said the challenge to the drug was part of a “guerrilla war” against the death penalty.

“The Constitution is clearly not intended to prohibit the death penalty by lethal injection or the use of the sedative midazolam,” Oklahoma’s Republican governor, Mary Fallin, said after the ruling.

Dale Baich, one of the inmates’ attorneys, said the ruling “contradicts the scientific and medical understanding of the drug’s properties.” Baich said litigation will continue on the issue in other cases around the country.

“We will continue to work in the courts to hold the states accountable in order to try and prevent botched executions in the future,” Baich said.

Lawyers for the inmates say midazolam is not approved for use in painful surgeries and should not be used in the death chamber because it cannot maintain a coma-like unconsciousness, potentially leaving inmates in intense pain from lethal injection drugs that halt breathing and stop the heart.

The Supreme Court in 1976 in a case called Gregg v. Georgia reinstated the death penalty in America, finding that its use did not constitute cruel and unusual punishment. Oklahoma in 1977 then became the first state to adopt lethal injection as a means of execution, according to the Death Penalty Information Center.

Thirty-one of the 50 U.S. states have the death penalty.

In April, Oklahoma’s governor signed a law allowing the state to use nitrogen gas as an alternative execution method if the Supreme Court ruled against the state or drugs became unavailable.