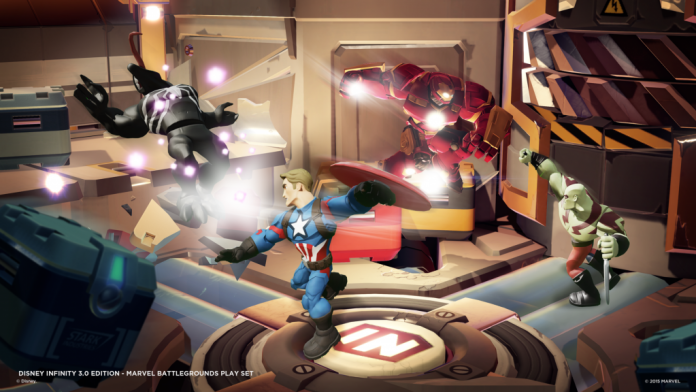 “Disney Infinity 3.0 Edition” is getting new characters and four-player gameplay with the release of the new Play Set called “Marvel Battlegrounds.”

In the trailer released by the company on October 8, the popular superheroes from Marvel such as Iron Man, Captain America, Groot, and Thor can be seen battling each other. According to the description of the video, players can battle up to three opponents in the chosen arena in a four-person local multiplayer.

Developed by United Front Games in partnership with Avalanche Software, “Marvel Battlegrounds” is the first Play Set that is fully compatible with all Marvel characters in “Disney Infinity.” So, the more sets a player has, the more playable characters he can choose from.

John Blackburn, SVP and GM of Disney Infinity said in a press release that the aim of the game is to develop an entirely new gaming experience for players. “The four-player arena style combat gameplay is a perfect way for friends and families to come together and play in head-to-head battles with some of their favorite Marvel characters,” he added.

Meanwhile, VP of Games of Marvel Entertainment Jay Ong said that they worked closely with the development team of “Disney Infinity” to create the all new storyline and gameplay for “Marvel Battlegrounds.” Ong explained, “We’ve created an authentic Marvel story that will give players the freedom to choose any Marvel figure in Disney Infinity and have them face off against each other in an arena style combat.”

Based on the same release, the new Play Set will revolve around Loki and Ultron’s partnership to steal the Infinity Stone from Asgard. To ensure their success, they create robotic replicas of the superheroes and let them fight each other. Some of the maps that players can choose from include Wakanda, S.H.I.E.L.D.’s Lunar Base, and the Brooklyn train yard.

“Marvel Battlegrounds” will be released in March 2016.