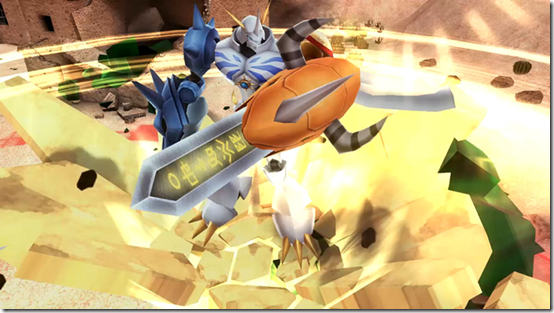 “Digimon World: Next Order” gets a new character design, called “The Executioner,” designed by Kenji Watanabe, the chief designer responsible for the many different characters in “Digimon.” On the Twitter account of the game, The Executioner is described as someone who has an “ominous aura,” noted Anime News Network.

The new character is a knight wearing black and bears a resemblance to Omegamon Zwart but without the “Metal Garurumon’s and War Greymon’s heads bound,” reported K Pop Starz. He is also a mysterious character that adds intrigue to the story of the game.

Aside from The Executioner, Omegamon (Omnimon), Imperialdramon Paladin Mode, Mastemon, Jesmon, and ShineGreymon will also be appearing in the game.

Prior to The Executioner, the official Twitter page of the game also teased a male character around two weeks ago. The post is in Japanese, but in a loosely translated version of the text, it described the human character as wearing yellow clothes and a black knit hat and carrying a Digi-Egg.

In a more detailed version, Gematsu translated, “A man with a black knitted hat and firing a sharp eye, everything about this character is shrouded in mystery. What is the significance of the Digi-Egg he holds in his hand? His identity is still uncertain but the protagonist, along with his friends, may encounter him along their journey.”

“Digimon World” is a video game initially released in 1999 for the PlayStation. Its storyline revolves around Digimons or virtual pets hatched from eggs that are trained to different levels. The game also involves battling with other players using various captured Digimons.

“Digimon World: Next Order” will be available on the PlayStation Vita in 2016.