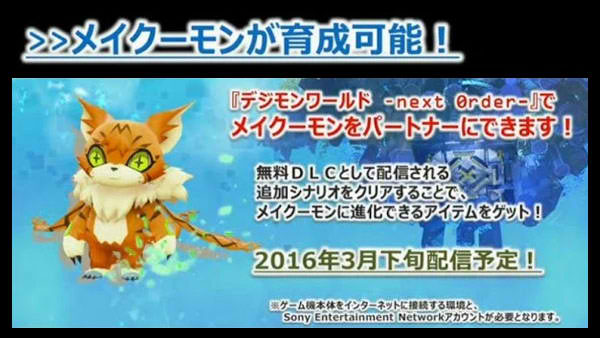 Game publisher BANDIA NAMCO Entertainment recently released new information regarding DLC scenarios for their upcoming game for the PlayStation Vita handheld, “Digimon World: Next Order.” More details about the Meicoomon DLC was released, and a familiar character from an older game, “Digimon World Re:Digitize Decode,” will be coming as well in a separate DLC.

After finishing the DLC scenario, the player will be rewarded with an item that will unlock the evolution to Meicoomon.

Meicoomon debuted in the new film of the original anime, “Digimon Adventure Tri.” While he made an appearance in the latter part of the first film with his Chosen Child/DigiDestined partner, his powers and abilities are yet to be revealed.

The next DLC scenario that will be coming to the game will feature a familiar character from one of the older games “Digimon World Re:Digitize Decode.” Rina Shinomiya will be coming to the DLC scenario, bringing with her her UlforceVeedramon partner named V.V., which also made an appearance in the mentioned game. The DLC scenario will be called “Super First Class Great Beautiful Girl Tamer Has Arrived!” It will have Rina Shinomiya come to the world of the game having with her a special request to the main protagonist of “Digimon World: Next Order.”

The Jump issue also showed a first look at Gumdramon and Shoutmon as they evolve to Arresterdramon and Omnishoutmon, respectively.

“Digimon World: Next Order” will be released in Japan on March 17.