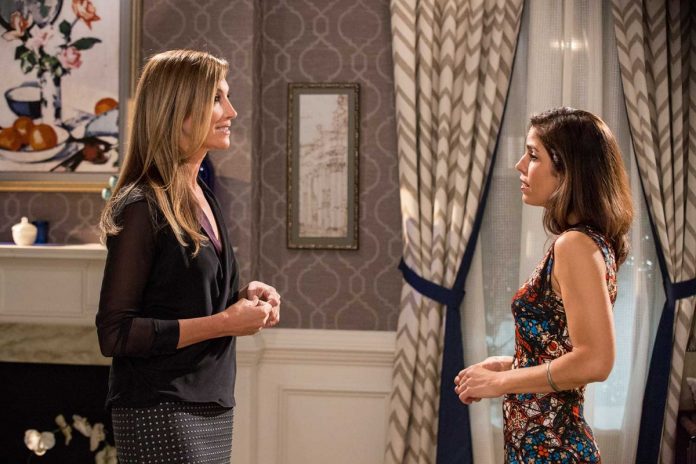 In episode 9 of the Lifetime‘s hit drama series, Devious Maids, Season 3, Genevieve Delatour’s new man Dr. Christopher Neff makes it clear that he does not want the maid Zoila Diaz around as he moves into the house.

Along with his many orders and criticisms of Zoila’s work, the doctor convinced Genevieve to bring in his maid of many years, Joy. When Zoila finds out, Genevieve said that it is not a permanent thing and Joy will only help with the household since Zoila is pregnant and cannot do all the things she is used to.

Susan Lucci who plays Genevieve talked to TV Line about her tight-knit relationship with Zoila portrayed by Judy Reyes.

“Honestly, I can’t reduce it to any one thing. It’s the writing, it’s the chemistry between Judy and me … I couldn’t ask for a better acting partner. She’s so wonderful to work with, and we just have a ball with the relationship; you often wonder who’s the boss and who’s the employee,” she said.

When asked if she thinks the viewers should give Dr. Neff the benefit of the doubt despite Genevieve’s history of being unlucky in love, she said:  “Well, he’s very handsome and very accomplished, so I think we have to give him a chance. I think he’s the best man to come into her life in quite a while, and she’s definitely looking for husband No. 57.”

Lucci also teased that with the Louie Becker’s killer still at large, the cast of the show is also guessing who the actual culprit may be. With only a few episodes left before the season wraps up, Lucci said that her character is still a suspect. Genevieve in turn will point her finger to Evelyn as the murderer.

She hinted that the show is actually leaving clues as they go along and advised viewers to pay more attention if they want to discover who it is before the season finale.

'Supernatural' season 12 spoilers: no end for Sam and Dean's adventures;...