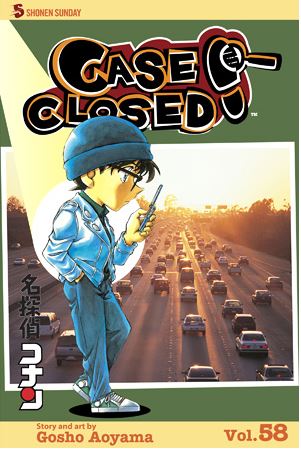 Japanese detective manga series “Detective Conan” just released the latest edition of the manga, and it gives a glimpse of student Subaru Okiya and detective Conan Edogawa delving deeper on the murder of Hiyama Kunisiha.

Chapter 949 of the current story started with Subaru questioning Conan about the former’s real identity when Senba Kazutoku, Kunisiha’s neighbor and the dessert shop owner, suddenly appears, disrupting the two’s exchange. Senba was also the first person to discover the dead body of his neighbor. Nevertheless, Conan promised Subaru that he will reveal his real persona once the crime at hand has been solved.

Senba, who is suffering pain on his leg after he claimed to have stepped on the shattered glass on the crime scene where he found Kunisiha’s body, was again interrogated by Subaru and Conan. He then aroused suspicion after Subaru noticed that he was holding on to his right leg despite saying that it was his left one that has stepped on the broken glass.

Subaru and Conan then asked Senba to recount the story of when and how he found Kunisiha. Unfortunately, Senba’s stories did not match up as he said that he did not notice the shards of glass on the floor upon entering the room. He also noted that he did not hear Conan and Subaru opening the door adding that when he got into the scene of crime, it was already opened.

The story concluded with Subaru and Conan deciding in unison that Senba was the real perpetrator. The two scavenged the house for any murder weapon or evidence that will convict Kunisiha’s neighbor.

“I’m thinking a jaw breaker in a ball thrower for extra power,” noted Reddit user Jetstream_Kage in reference to how Senba executed his murder plot which fans will reportedly have a cleared veiw of when chapter 950 arrives.

In the next installment of the series, fans can expect Conan and Subaru still teaming up to resolve the new murder mystery at hand. In a recent Reddit discussion about the upcoming chapter, fans are speculating the instead of Senba actually being the perpetartor, he might just be framed for the crime. On top of that, it is also purported that the original identity of the suspect will be revealed in 950 as well as the way he mastered and did his plan.

Unfortunately for him, Conan and Subaru will be relentless in cracking the mystery by using various technicques which reportedly includes using iron balls to demonstrate the logistics of the crime.

'How to Get Away with Murder' news: ABC still mum about...