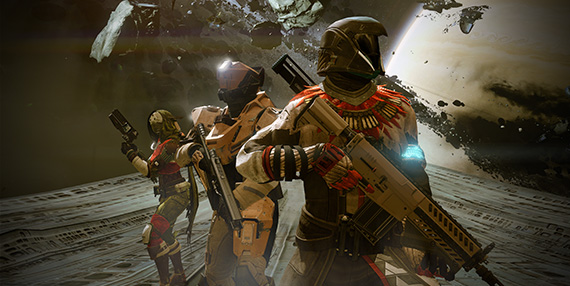 The latest expansion pack for Bungie’s hit game Destiny, The Taken King, is getting closer and closer. To celebrate the upcoming expansion pack, Bungie was doing a live-streaming event today, giving players a first look on the game’s new story expansion.

The live-streaming event will be made live on Twitch, and was to start on 11AM PST. It will feature community manager Deej, game lead designer James Tsa, and community guest Mr. Fruit as they take on Dreadnaught and fight the Taken King.

Previously, the people at Bungie talked about the new Vertigo map, coming with the new expansion pack.

“One of the big things that we realized in development was how the symmetrical layout of this map led players to having a more difficult time determining precisely which side of the map they were on,” said Bungie’s senior multiplayer designer Andrew Weldon about the new map. “What helped us determine how to break the map apart into different areas [was] very heavy directional sunlight bathing one half of the map entirely, [with] the other side cast in shadow, lit with the artificial lighting of the Cabal.”

In other news, Destiny game developer Bungie posted a job opening on their official website. According the job posting, the game company is currently looking for a Compatibility Tester, with skills required and preferred focusing on PC gaming.

While the job post did not point out any specific project that the new Compatibility Tester will be working on, people in the gaming community have been quick to speculate that this could mean that a Destiny PC port would be coming anytime soon.