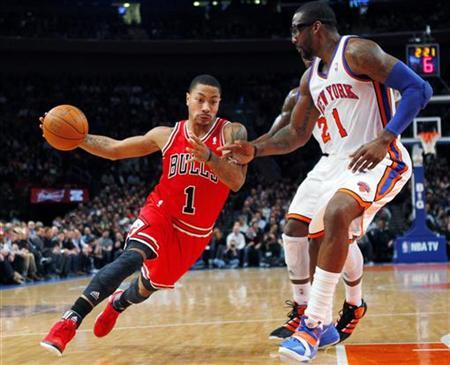 With Jimmy Butler re-signing for a max deal worth $90 million and a signing bonus of $4.6 million in Chicago Bulls, rumors have it that the other alpha male Derrick Rose may possibly transfer to another team.

Bleacher Report supposes that although he may have the record of being the youngest Most Valuable Player in the history, the hometown hero has suffered three knee injuries since 2012, with his latest surgery on February that has kept him off the court for five weeks.

Bulls is said to have missed out two years on Rose’s big deal due to his health problems but they still owe him $20.1 million and $21.3 million for two more seasons left on his contract.

In an interview with Joe Cowley of Chicago Sun-Times, he said that probably the best way for the Bulls to have a decision is to make Rose a free agent. It does not necessarily mean that they have to give him to other teams but it may do Bulls some good if they know his trade value.

Adding to the speculation is the alleged on-court rift between Butler and Rose, with some reports claiming that the team should consider moving on from Rose and building around Butler.

There was apparently tension at their game against Cleveland Cavaliers, which they have lost, 94-73, and ended Bulls’ season in Game 6 of Eastern Conference Semifinals.

Butler, however, refuted the rumors and stated that, “I don’t think we have any issues. I think we’re fine. I think we’re two basketball players that want to win games. That’s where I’ll leave it at. I think we just wanna win, bring a championship the city, to the organization. I think that’s our job. And I think we’re gonna do whatever it takes to make that happen. I have a lot of respect for the guy,” Rolling Stone shares.

Basketbull Sportsblog mentions that if Rose is theoretically traded, he may go well with Detroit Pistons as they have plenty of salary cap room. Having him in the team may put them back on the national stage.

The report notes though that it may be highly unlikely for Bulls to give Rose up as his is the center point and face of the franchise.