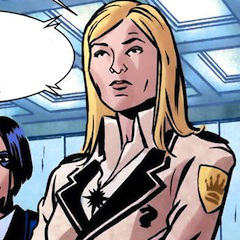 A new DC Comics character will be jumping from the pages of the comics to the small screen on Legends of Tomorrow.

As reported by TVLine, Stephanie Corneliussen (Mr. Robot) will be coming to DC’s Legends of Tomorrow as Soviet physicist Valentina Vostok (also known in the comics as Negative Woman). In the series, Valentina is a Soviet physicist during the Cold War period who will “stop at nothing to defend her precious “Motherland.” She was later on suspected by the team of heroes to be secretly working for the villain Vandal Savage. This will lead to Ray Palmer and Captain Cold getting close to her to win her trust, in order for them to know where her loyalties really lie.

Previously, rumors of the Metal Men coming to Legends of Tomorrow have popped up, immediately after Marc Guggenheim posted on Twitter a photo that seemed to hint at the coming of the characters to the show.

The Metal Men is a group of six robots with artificial intelligence, created by Dr. Will Magnus, and each called by the metal they were made ofGold, Iron, Mercury, Lead, Tin, and the female Platinum. The Metal Men first gained popularity back in the Silver Age of comics in 1962, and has then appeared in a number of animated adaptations, but are yet to have their live-action debut.

Unfortunately, Guggenheim himself later clarified that the previous post was intended not to be a tease for the Metal Men, but rather only a Newstime Easter Egg.

The new series follows time-traveller Rip Hunter as he forms a team of heroes and villains to fight for the world, and for time itself against the immortal Vandal Savage. Starring are Brandon Routh as Ray Palmer/The Atom, Caity Lotz as Sara Lance/White Canary (both are originally from Arrow), Wentworth Miller and Dominic Purcell as Captain Cold and Heatwave, Victor Garber as Dr. Martin Stein (all orignally from The Flash), Ciara Renee as Kendra Saunders/Hawkgirl, Falk Hentschel as Carter Hall/Hawkman, Arthur Darvill as Rip Hunter, and Casper Crump as the villain Vandal Savage.