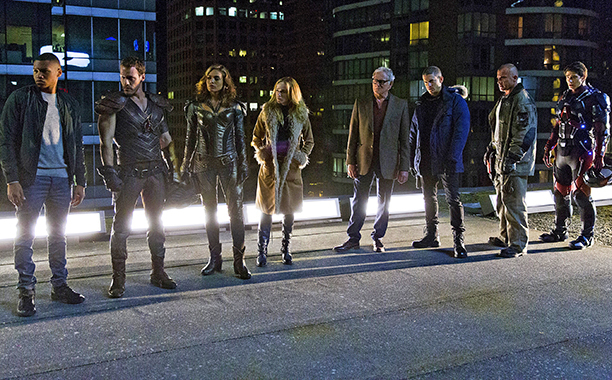 The upcoming new spinoff series from The CW, “DC’s Legends of Tomorrow,” is set to bring a very unlikely band of superheroes and villains in a timeline-spanning mission to save the world. Most of the characters that will be coming to the show have previously appeared in the two major shows of the network”Arrow” and “The Flash.” With the two shows crossing over at least once per season, fans are wondering if the new series will do a crossover with either seriesor both.

In a recent interview with Entertainment Weekly, the show’s executive producer Greg Berlanti explained that while the show opened up through the most recent crossover event of “Arrow” and “The Flash,” “DC’s Legends of Tomorrow” crossing over to either of the two series will be very unlikely, considering that the show is more on travelling through time.

“It’s intermittent throughout,” Berlanti said. “Because they’re a band of time traveling rogues, it’s harder for ‘Arrow’ and ‘Flash’ to be connected story wise to it throughout the season. That being said, if you know the histories of ‘Arrow’ and ‘Flash,’ it should be extra fun in its own way as we delve deeper and deeper into the characters’ lives.”

However, it does not mean that the characters form the two main shows won’t be making any kind of appearance on “Legends” at all. While other characters form both shows have been revealed to come in some capacity to the new spinoffincluding Carlos Valdes’s Cisco Ramon, Matt Nable’s Ra’s al Ghul, and Neal McDonough’s Damien Darhk. Berlanti revealed that there is a “100 percent chance” that younger or older versions of Barry Allen and Oliver Queen would come to the show as well.

“We will have a couple marked crossover moments that hopefully will keep people satisfied,” executive producer Phil Klemmer said.

“DC’s Legends of Tomorrow” will premiere on Jan. 21 on The CW.

'Legend of Zelda' rumors: Game centers on father and daughter, may...