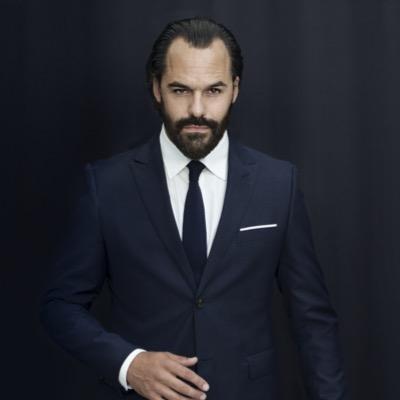 The upcoming The Flash spinoff series, DC’s Legends of Tomorrow, will be featuring the immortal time-travelling villain Vandal Savage as the series’ first big threat. However, before he makes his appearance in the upcoming series, Casper Crump, who plays the role of Vandal Savage, will be appearing in the upcoming Arrow-The Flash crossover episode.

The actor posted on his Twitter account that he was on the set of The Flash, where Arrow-main man Stephen Amell also guest stars.

The crossover episode will once again bring together Oliver Queen/Green Arrow (Stephen Amell) and Barry Allen/The Flash (Grant Gustin), where Vandal Savage will be introduced, and will set the stage for the entrance of Legends of Tomorrow with its mid-season series premiere.

Previously, Stephanie Corneliussen (Mr. Robot) will be coming to DC’s Legends of Tomorrow as Soviet physicist Valentina Vostok (also known in the comics as Negative Woman). In the series, Valentina is a Soviet physicist during the Cold War period who will “stop at nothing to defend her precious “Motherland.” She was later on suspected by the team of heroes to be secretly working for the villain Vandal Savage. This will lead to Ray Palmer and Captain Cold getting close to her to win her trust, in order for them to know where her loyalties really lie.

Previously, rumors of the Metal Men coming to Legends of Tomorrow have popped up, immediately after Marc Guggenheim posted on Twitter a photo that seemed to hint at the arrival of the characters to the show.

Unfortunately, Guggenheim himself later clarified that the previous post was intended not to be a tease for the metal Men, but rather only a Newstime Easter Egg.

The new series follows time-traveller Rip Hunter as he forms a team of heroes and villains to fight for the world, and for time itself against the immortal Vandal Savage. Starring are Brandon Routh as Ray Palmer/The Atom, Caity Lotz as Sara Lance/White Canary (both are originally from Arrow), Wentworth Miller and Dominic Purcell as Captain Cold and Heatwave, Victor Garber as Dr. Martin Stein (all orignally from The Flash), Ciara Renee as Kendra Saunders/Hawkgirl, Falk Hentschel as Carter Hall/Hawkman, Arthur Darvill as Rip Hunter, and Casper Crump as the villain Vandal Savage.