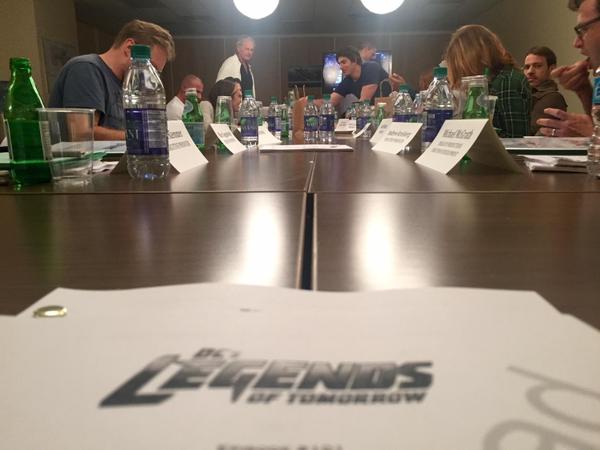 Fresh from their reveal of the very first trailer for the Season 4 of Arrow, show co-producer Marc Guggenheim revealed a behind-the-scenes image for DC’s Legends of Tomorrow.

Guggenheim posted through his Twitter account a photo of the table read session for the upcoming spin-off series, showing of the cast and the showrunners gathered together in one room.

Prior to this, the very first trailer for the upcoming fourth season of Arrow made its way online. The trailer shows off the first live look of Oliver in his new Green Arrow suit, Diggle sporting his new look, as well as the season main villain, Damien Darhk. The show’s home city, previously called Starling City, was now rebranded to Star City, in honor of the late Ray Palmer. Palmer was taken by a blast in the season three finale, but fans have already known that the character is far from being dead. The trailer also showed Matt Ryan as John Constantine, and Sarah Lance coming back to life from the Lazarus Pit.

Phil Klemmer, showrunner of the upcoming series DC’s Legends of Tomorrow, recently revealed details about the upcoming showwho’s who, and the fact that not everyone will be making it at the end of it all.

The new series follows time-traveller Rip Hunter as he forms a team of heroes and villains to fight for the world, and for time itself against the immortal Vandal Savage. Starring are Brandon Routh as Ray Palmer/The Atom, Caity Lotz as Sara Lance/White Canary (both are originally from Arrow), Wentworth Miller and Dominic Purcell as Captain Cold and Heatwave, Victor Garber as Dr. Martin Stein (all orignally from The Flash), Ciara Renee as Kendra Saunders/Hawkgirl, Arthur Darvill as Rip Hunter, and Casper Crump as the villain Vandal Savage.