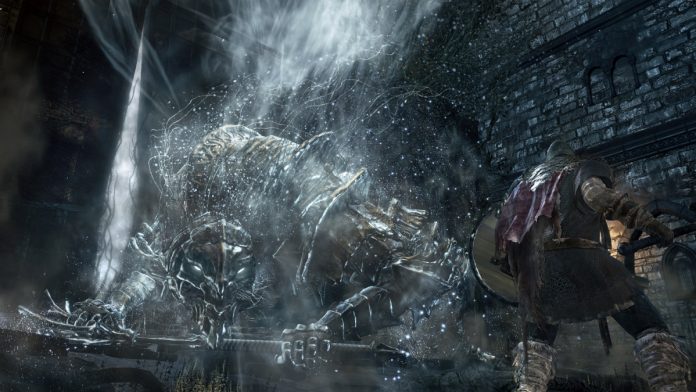 The cinematic opening of the role-playing game “Dark Souls 3” is here, featuring the world of Lothric and some of characters making their debut in the narrative.

According to VG247, Bandai Namco and From Software debuted the three-minute clip earlier this week, and it showcased the reclusive lord of the profane capitol Yhorm the Giant, Aldrich Saint of the Deep, and Farron’s Undead Legion, the Abyss Watchers, among others. There is also talk of the Old Worlds which brought pilgrims to the north.

Titled “To the Kingdom of Lothric,” the footage opened with the narrator stating “Yes Indeed,” followed by a seeming tease of Lothric by saying it is “the transitory lands of the Lords of Cinder converge.”

“In venturing North, the pilgrims discovered the Old Worlds. The fire fades and the lords go without thrones. When the link of fire is threatened… only in truth, the lords will abandon their thrones and the enkindled will rise. Nameless and dead, unfit even to be cinder and so it is, that Ash seeketh embers.”

Reports claim that ash is a big component of the alleged final installment in the series as evident in the scenes with only a little dash of color but a lot of fog and ominous dark clouds suggesting mystery and suspense to unfold.

In the gameplay, players are expected to uncover what happened to the apocalyptic land as they try to destroy the awakened Lords of Cinder. There will be in-game options and set of tools to customize gaming experience. This includes Skills that adds attack modifiers to each weapon type, increase in axe’s attack power in War Cry and breaking enemy guard with Ready Stance.

“Dark Souls 3” is slated to be released on April 12 across platforms such as PC, PlayStation 4 and Xbox One. It will arrive earlier on March 24 for those who live in Japan with the version dubbed in Nihongo.