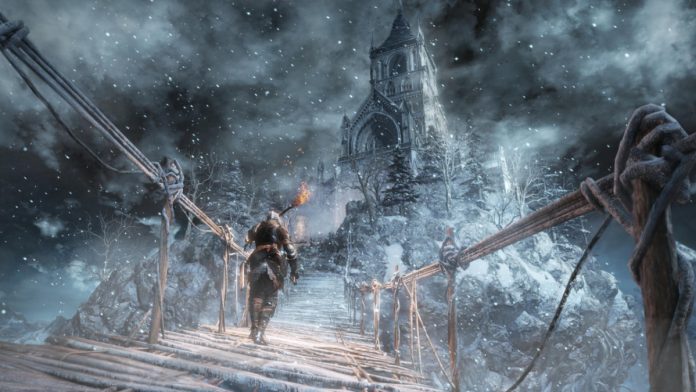 The first gameplay trailer for the forthcoming downloadable content (DLC) of “Dark Souls III” has recently rolled out. Alongside the initial look at the first DLC pack, a new boss was also previewed just before the clip closed out with a massive battle.

As usual, the exact plot of the expansion titled “Ashes of Ariandel” has yet to be disclosed; although, it has already been revealed that the game will be set on a journey to the frozen land of Ariandel. There, players will have to battle the evil from within and delve deep into the mystery of how the surroundings eventually got devastated.

According to publisher Bandai Namco (via GameSpot), who added some new information on what fans can expect, the DLC will immerse players in a new environment full of secrets. Apparently, in the new content, players will “find themselves steeped in a brand new environment filled with terrifying new enemies, challenges, and exciting lore to expand the overarching Dark Souls 3 storyline.”

Aside from the recently released trailer, a slew of new screenshots has also been rolled out, one of which revealed an enemy similar to the Crow Demon.

“Ashes of Ariandel” is the first of the two planned expansion packs for “Dark Souls III” and will cost fans $15 on all major consoles like PlayStation 4, Xbox One and PC. It will go live on Oct. 25. For those who are interested in the game’s season pass, on the other hand, they are up for grabs for only $25. Meanwhile, the second DLC, which is most probably last content for the franchise that will be coming out, is expected to debut sometime early next year.

While fans are looking forward to the two expansion packs for “Dark Souls III,” From Software president and franchise director Hidetaka Miyazaki revealed that they no longer have plans in continuing the series.

“It’s time to move away from the Dark Souls franchise,” Miyazaki told Polygon in a recent interview. “As president of From Software, I’m not completely denying the possibility of bringing back the franchise in the future.”