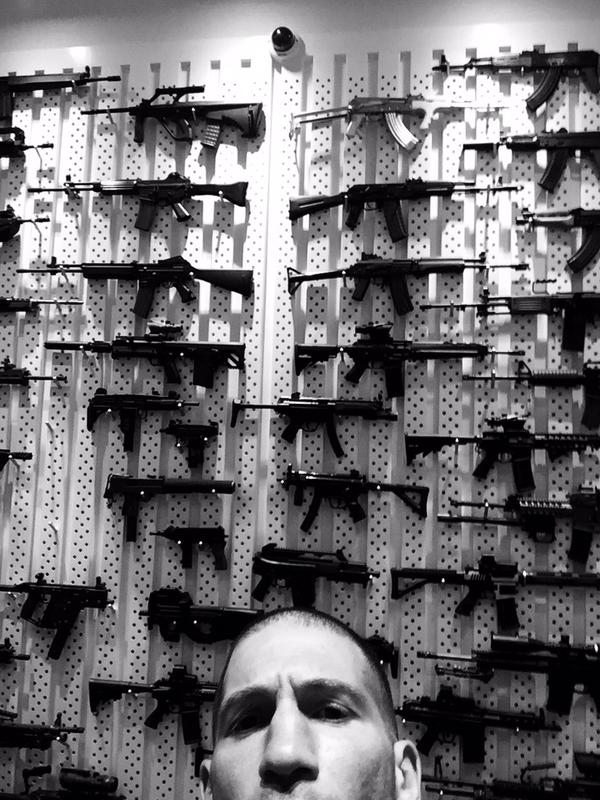 A few months ago, it was revealed that Daredevil will see an installment after its success from the previous series. Along with this, the villains were also revealed a few weeks back, which includes The Punisher and Elektra.

Jon Berthnal, who will play The Punisher in season two, posted in his twitter photo of several guns, along with a caption “PUNISH,” living up to his reputation as a one-man army in the upcoming sequel. His arsenal of weapons is sure to keep Matt Murdock (Charlie Cox) or Daredevil’s hands full.

In the sophomore series, The Punisher will appear almost as often as Daredevil, taking along with it a darker side on the storyline. Joe Quesada, Marvel’s Chief Creative Officer, said that “We’re so happy to have Jon Bernthal because we have such a world-class cast on Daredevil; we have a world-class actor in Charlie Cox that we want to make sure we chose and were able to attain an actor who is on that same level so I think the combination of seeing Charlie and John perform those parts on the same screen. It’s going to be epic, absolutely epic,” reported by International Business Times UK.

The Punisher will also square off with Daredevil in season two of the show. Contrary to the no-kill policy in season one, Berthnal’s character is a serial killer who targets criminals, thus their conflict in point of view might result in a confrontation between the two crime fighters.

Along with The Punisher, the sequel is also expected to see Elodie Yung as Elektra, Daredevil’s lover-turned-enemy. Aside from them, season two is also expected to be joined by season one characters, Deborah Ann Woll as Karen Page, Elden Henson as Franklin “Foggy” Nelson, and Vincent D’Onofrio as Wilson Fisk.

The second season of Daredevil is set to premiere on 2016.

Bleach chapter 639 predictions may use poison to defeat Pernida,...