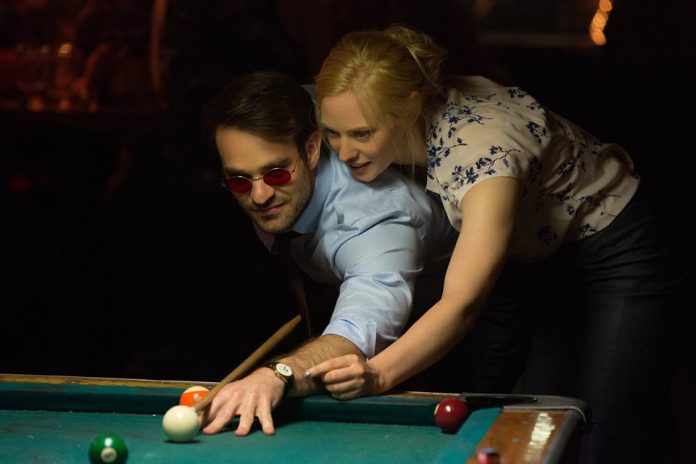 While a lot of fans are still ogling the newest Marvel superhero to land on Netflix in Mike Colter’s “Luke Cage” after binge watching it, some, on the other hand, want to do a reset and revisit the show that started it all in “Daredevil.” The Charlie Cox starrer still has a long way to go before returning, with “The Defenders” still looming, but that does not mean that conversations about the lawyer by day, hero by night are also getting shoved to the sidelines.

Being deeply tied to the now growing Marvel TV Universe via the streaming platform, given the two seasons under its belt, “Daredevil” left a couple of questions hanging in its latest season finale. Most prominent in the pool is that of Matt Murdock dropping the bomb on Karen, played by Deborah Ann Woll, regarding his Hell’s Kitchen alter ego. Obviously, the narrative can go both ways moving forward in regard to the budding romance between the blind superhero and the enigmatic lady. So when the actress was interviewed by Seat42F, the media outlet asked whether she thinks fans should invest their feelings in her character and Matt’s love story in the confirmed third year of the series

“I love the romantic plot between Matt and Karen. But I think what’s interesting is that we’re learning about who they are separately, first,” she said. “That we tried getting them together in that second season, but it was never going to work because they were hiding half of who they were from each other. So now Matt’s revealed, who he is but Karen revealed who she is yet. So that’s really going to be her move, because when does she decide to tell Matt that she represents everything he hates? So I think their relationship, whether it continues to be romantic or not, is going to be a fascinating one to live with.”

Those who are pining for the two to eventually dive into a full-fledged romance should not be wary, at least thus far. Karen has been the longest the love interest for Matt in the pages of the comic books and it might be kind of a let-down to cut their romance short right away.

However, before Matt can return to his own little pocket in Hell’s Kitchen, he will come across some other crime-fighting people including Luke Cage, Krysten Ritter’s Jessica Jones and the soon to be debuted Iron Fist played by Finn Jones. Together, a cumulative team called the Defenders will come to Netflix by 2017.

Since “Iron Fist” was announced to have an availability date of March 17, and given that Marvel strictly adheres to a six-month period for their web shows, “The Defenders” can be expected by September of next year. Presumably, six months after that would be the return of “Daredevil” for its third season.