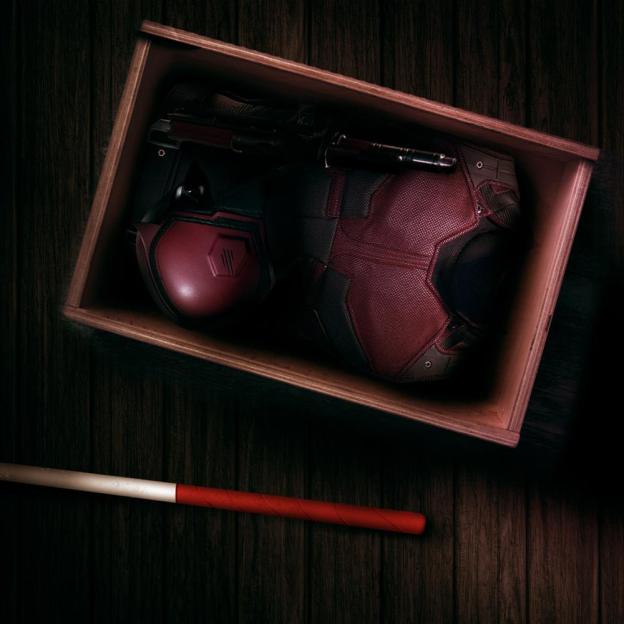 The second season for the Marvel/Netflix series Daredevil is not due to premiere until next year.

However, the production has released an early peek into what viewers can expect from this year’s highly successful Netflix series. For instance, the superhero will be sporting a new suit in the second season.

Last week, according to BGR, the official Twitter account of the series uploaded an image of an open box carrying the new costume for Marvel’s blind superhero.

“The suit makes the man,” the post’s caption said.

There have been few details that Marvel and Netflix have revealed for the upcoming second season of Daredevil.

The International Business Times said that Marvel’s Joe Quesada has revealed that both The Punisher and Elektra will be appearing in the second season of the series.

Elodie Yung and Jon Berthal will be playing Elektra and The Punisher, respectively, Quesada told IGN.

The Marvel exec said that Jon Berthal was the best actor to play The Punisher, describing him as a “world class” actor in the same level as Charlie Cox, who plays Matt Murdock, the alter ego of the Daredevil.

“I think the combination of seeing Charlie and John perform those parts on the same screen… [is] going to be epic, absolutely epic,” Quesada said during the interview with IGN.

Quesada also praised the casting of Yung. Marvel’s CCO said that Elodie is the perfect actress for Elektra and that her martial arts and stunt backgrounds will help her a lot in her portrayal of the assassin who also becomes Murdock’s love interest.

“It’s going to be really, really awesome to see her take over the role and see how she embodies and how she personifies Elektra,” he said of Yung as Elektra.

Quesada also promised that fans can look forward to many great things on Daredevil’s second season, in the same vein as Season 1.

“I think we established a really good tempo with Season 1, so fans can hopefully expect much more of the same,” he promised.

'The Blacklist' season 3 spoilers: Liz to have emergency C-section after...