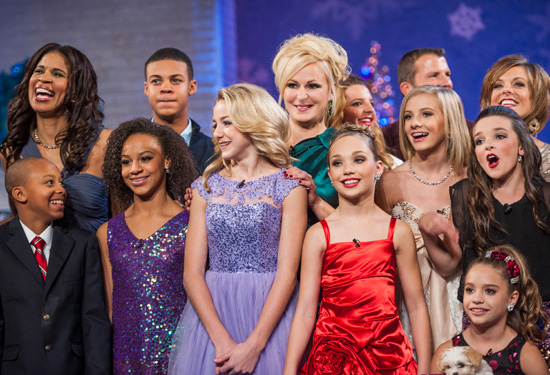 Though one of her original star dancers is leaving the series, Abby Lee Miller, the owner and chief choreographer of the Abby Lee Dance Company, is confident that her reality series, “Dance Moms,” will continue on unscathed.

Speaking from the Kids’ Choice Awards in Los Angeles on Saturday, March 12, Miller told Entertainment Tonight that she is excited for her reality series’ future and that Maddie Ziegler’s impending departure is nothing she hasn’t already been through.

13-year-old Ziegler, who rose to fame after starring in Sia’s music video trilogy, has been with “Dance Moms” since its debut in 2011 and has been a student at the Abby Lee Dance Company since the age of four. The dancer/actress recently confirmed that she is leaving “Dance Moms” to work on her acting career. She will also soon appear as a judge in the latest season of “So You Think You Can Dance.”

Ziegler’s mom, Melissa Gisoni, and younger sister Mackenzie are departing the show with her.

Despite Ziegler’s long-time relationship with Miller and the ALDC, the choreographer doesn’t worry about her student’s exit. “I’ve taken so many kids out of Pittsburgh and onto the great white way in New York City right into a Broadway show,” she told ET. “Right here in Los Angeles, I have kids working in different television shows, in the movies, everything. So, [Ziegler’s] just another one of those kids I think I’ve proven my talent with.”

“I create stars,” she said.

Meanwhile, Ziegler also spoke about her imminent exit, telling reporters, including Hollywood Life, at the Kids’ Choice Awards, “I am leaving, but it’ll be a good thing because we’re moving on to cool things.”

Asked about her favorite memory from “Dance Moms,” Ziegler answered, “Definitely being with the girls every single day and having so much fun when you’re not dancing.”

The next episode of “Dance Moms,” which is titled “The Maddie Rumor,” sees Maddie being nominated for a People’s Choice Award, the minis coming back, and the dance moms getting mad over Miller’s guest at the awards show.