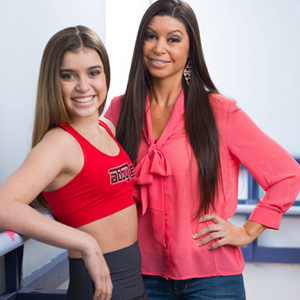 With the renewal of Lifetime’s reality dance competition series, “Dance Moms” for season six, speculations abound on who will be joining the cast.

Coach Abby Lee Miller has shared previously that she remains uncertain if she will continue on to the next season as there were problems when it comes to her payment. Although she recently posted about auditions for aspiring new talent, there is no official word yet if she will reprise her role.

Reports claim that if she decides to leave, Cathy Nesbitt-Stein of Candy Apple’s Dance Center, who joined the show in 2011 but exited last season, is willing to take her place.

Talking to International Business Times, “I would love, love, love to come back to the show. I absolutely enjoy doing it. If they could do something that they could come back here I would definitely be very interested participating with them,” she stated.

When asked if she would be willing to lead the program, she answered with “Oh my gosh, in a heartbeat. If that’s the direction that they wanted to go because then I know they have to film in Ohio. I don’t know that Abby would let that happen, though.”

The former reality star also straightened out the rumors and revealed that the true reason why she departed from the series is due to conflict of schedule for her studio she doesn’t feel comfortable leaving her clients.

On a separate news, Kalani Hilliker exclusively told OK Magazine that some scenes on the finale episode was staged for the ratings, “I actually did do a solo at nationals. It just wasn’t aired on TV, but Mackenzie [Ziegler] and I actually did do solos.”

Viewers will remember that Lee Miller has to choose between Hilliker and Nia Sioux on who will compete alongside Ziegler, when she decided to go with the latter, it sparked some drama among the mothers.

Despite the arguments, Hilliker confirmed that she will be back for another season.