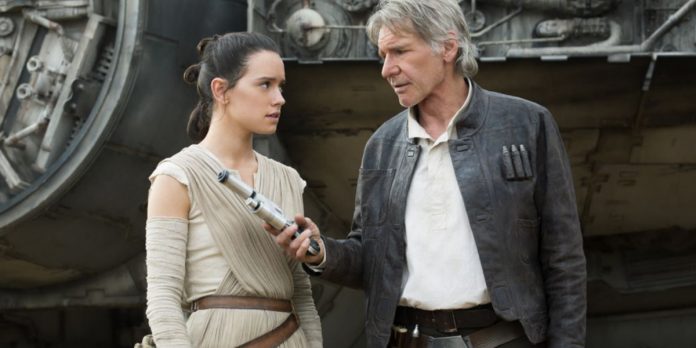 Daisy Ridley, who leads the new trilogy of “Star Wars” took a breather from the busy production of “Episode VIII” and shares her sentiments on the devastating death of Harrison Ford’s Han Solo in “Star Wars: Episode VII The Force Awakens.”

Ridley, who plays newcomer Rey in the space soap opera saga, recently talked to The Big Issue (via Cinema Blend) and explained why she thinks Han’s death has been that much impactful in the franchise especially with future stories to come.

“You probably have a bigger emotional reaction than reading a newspaper and just seeing facts and figures [because] instead you see someone’s life play out, their soul, and the way they react and respond to the world around them. …” Ridley explained. Interestingly enough, Ridley’s Rey was also just an onlooker on the specific scene where Han was pierced by his son, Ben aka Kylo Ren’s (Adam Driver) lightsaber in the chest which spelled his death.

“If everybody puts a piece of themselves into Han Solo and Han Solo dies in the cinema, where it’s dark you can express it, and it alleviates some of the pain. His death is obviously not as important as actual lives that are lost, but people probably use it as some kind of carrier for the grief,” the actress continued.

Chewbacca’s roar of rage and sadness arguably also added to the gravitas of the moment as well as Leia (Carrie Fisher) eventually feeling what happened through the Force. Moreover, It does not help that the Kylo showed no remorse for what he did. On the contrary, he was even depicted as unattached to the death of his father which is the reason why some fans are set on the possibility that he will never be redeemable.

Han’s life may be over but “The Force Awakens” will definitely not be the last time that the fan-favorite smuggler will be referred to in the future installments of “Star Wars.” In fact, rumor has it that the upcoming installment in the space soap opera will have an emotional funeral for General Solo and will be a venue for the start of political talks in the galaxy.

Meanwhile, director Rian Johnson and the rest of the people working on “Episode VIII” have already finished shooting scenes in Ireland just recently. And the team did not forget to express their gratitude to the Irish people as they have even commissioned an ad in a local newspaper to thank the natives including those in Crookhaven and Goleen.

Last week, Johnson has already delivered the good news via his official Twitter account also expressing his appreciation for the warm welcome that they have received. The team including Mark Hamill who plays Luke Skywalker, Ridley and Driver filmed some scenes around the European country which may hint on a possible exploration of the mysterious Planet Achc-To from “The Force Awakens.”