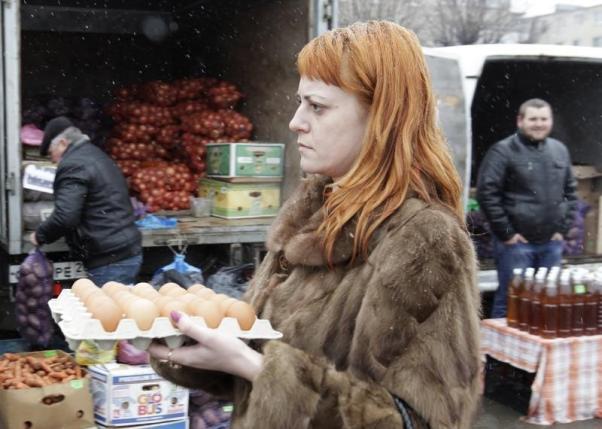 Russia’s interest rates are high and inflation is racing, but all the while his country slides into recession, President Vladimir Putin denies any economic crisis.

It may be bravado linked to Moscow’s standoff with the West over Ukraine. But with the European Union extending sanctions on Russia and the price of oil still low, Putin’s refusal to make economic reforms worries Russian and foreign business leaders.

Russian officials from Putin down acknowledge the economy must be diversified to reduce dependence on energy exports, the government’s main source of revenue. The president duly included a call for reforms in his speech at the conference.

But foreign investors say Putin has for years done little more than pay lip service to the need for reforms and a senior Kremlin official acknowledged privately: “We’ve done nothing to diversify the economy.”

At Russia’s biggest annual business conference last week in St Petersburg a straw poll during one of the main debates showed that 48.2 percent of the audience – comprising foreign and domestic business leaders – thought there would be no reforms because of a lack of political will.

He warned: “A year from now we will see there are not 50 percent of us (who think this way) but 70 percent. You cannot put off solving this problem for another year or two.”

In a separate audience poll on how Russia could overcome its economic problems, 36.8 percent of conference attendees said it would not be able to and that a long stagnation lay ahead.

Many Western companies have stayed in Russia despite the sanctions, but investors’ confidence in Russia has sagged since the EU imposed visa bans and asset freezes on Russian officials last year and later tightened the sanctions by targeting the defense, finance and energy sectors.

“Clearly for Russia, it is important to rebuild that confidence,” Ian Colebourne, chief executive officer of Deloitte in the CIS grouping of former Soviet republics, told Reuters Television.

“We are hearing about the need for reform to continue … but from a business point of view we see supporting those reforms as necessary to get investors back into the country.”

Any brickbats from inside Russia about the state of the economy are aimed almost exclusively at the government – Putin’s popularity ratings soared after the annexation of the Crimea peninsula from Ukraine last year – which has responded to the downturn by cutting most spending plans by about 10 percent.

It has also loaned money to firms and banks to help them through, banned some Western food imports and urged Russian companies to use domestic parts where possible, with the aim of boosting industry at home.

Few Russians criticize Putin openly, especially at a time of confrontation with the West over Ukraine when they might risk seeming anti-patriotic.

As a result there are no signs that Putin will face any street protests over the economy, though some economists and opposition politicians warn of trouble ahead.

By suggesting last week that the 2018 presidential election should be held early to give Putin a mandate for reform, Kudrin tacitly acknowledged that the downturn and lack of reforms could eventually be a problem for the president. [ID:nL5N0Z4295}

Kudrin remains a Putin supporter and is convinced the president can win another six-year term. It is unlikely he spoke without the Kremlin’s knowledge or agreement.

“We always talk about the situation as it was ‘yesterday,’ about our problems in the past, but no one even tries to discuss our future situation,” he said in St Petersburg.

Looming debt repayments are also a problem for Russian companies and an economystarved of foreign funds because of sanctions.

Jacek Pastuszka, president of Baltika Breweries/senior vice president Eastern Europe for Carlsberg Group, said: “It will require a much more structured effort to improve the foundation of the economy to bring in new capital, to improve the competitiveness of the local market.”

There are some positive signs. Russia’s central bank reduced its main interest rate by a percentage point to 11.5 percent last week, inflation has eased from 16.9 percent in April to 15.8 percent in May, and the rouble has risen to around 54 to the dollar after briefly hitting 80 in December.

But the rouble is down by more than a third against the U.S. dollar compared to before the crisis in Ukraine, capital flight was more than $151 billion in 2014 and the central bank expects the economy to decline 3.2 percent this year.

Some expect a deeper contraction and point out that it will be even harder for the government to carry out possibly painful reforms than when the economy was in better shape.

“In our base-case scenario we believe that structural reforms are unlikely,” said Karen Vartapetov, associate director at S&P ratings agency in Russia, detailing projects shelved since Putin returned to the presidency in 2012 after four years as prime minister.

He said federal relations with the regions outside Moscow gave them no incentives to reform and attract investments: “There are no triggers for regional growth.”

Economy Minister Alexei Ulyukayev said Russia was now in a “new reality” where economic growth, which averaged 7 percent during an oil-fueled boom under Putin from 2000-08, would now be below the global average.

Kudrin said that even 2 or 3 percent annual growth could be out of reach for Russia in the years ahead.