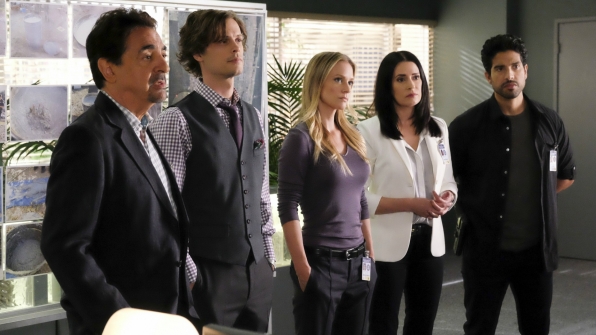 It is business as usual in the Behavioral Analysis Unit (BAU) until Emily Prentiss (Paget Brewster) enters the office with a box of donuts saying that she is lending a helping hand to the team in an all-new episode of “Criminal Minds.”

Tonight’s episode titled “Taboo” mainly revolves around a weekly case that involves three women disappearing and being buried under what appears to be rocks or concrete. And while from the surface, it appears that there is no big spectacle going down in the chapter, a quiet shift in the FBI office has been rolled out following veteran cast member Thomas Gibson’s last outing as Aaron “Hotch” Hotchner last week.

Questions regarding Hotch’s absence and eventual exit from the show have been one of the main mysteries surrounding the season. Folks behind the police procedural have been adamant that no farewell episode was shot in the wake of the unfortunate incident. However, through an exclusive clip from the upcoming installment, courtesy of TV Line, the series was actually able to explain why the BAU unit chief is not around for this particular case.

Apparently, it was actually Hotch who reached out to Emily for help as he was assigned for temporary duty, as the former Interpol agent tells JJ (A.J. Cook) and Reid (Matthew Gray Gubler). Furthermore, the episode’s promo clip suggests that she will also be taking the lead in tackling the case at hand. It seems that at this point in the narrative; “Criminal Minds” is still treating Prentiss’ return as something that temporary which was the original setup. But since the situation behind the camera did not allow Gibson to return to the show, it can be assumed that her decision to eventually stay for the long haul will be incorporated in future episodes.

Once initial pleasantries are out of the way, Prentiss immediately starts profiling newbie Luke Alvez (Adam Rodriguez) by examining his very minimalist desk without knowing that he is approaching her from behind. The sequence makes for an awkward introduction which will progress throughout the episode as the two get assigned to a stakeout.

“She messes up by profiling him and he can hear her,” Brewster said of her character’s first encounter with Alvez in an interview with TV Guide. “She sort of has to make up for this big social faux pas. Adam’s a great guy and a great actor … and [Alvez] is a great addition to the team.”

“We’re all so excited to have Paget with us full time,” executive producer Erica Messer said last month when news broke of the actress’ return. “The BAU family has definitely missed her, on screen and off. Having her back on set has been great, it’s like she never left.”